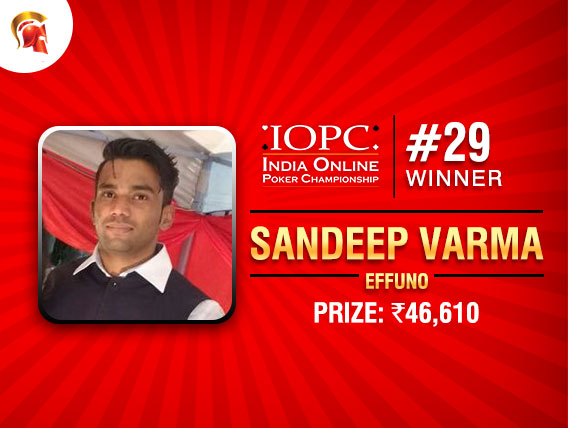 IOPC Event #29 INR 2 Lac GTD (700 KO,RE) was the third tournament of Day 6 in the ongoing India Online Poker Championship (IOPC), India’s biggest online poker series where guaranteed prizes of INR 7+ crore will be given away during 13-22 July by The Spartan Poker.

The tournament began at 6pm IST and once again, the guarantee was beaten as 483 entries registered to the tournament and the prize pool created was of INR 2,41,500. Coming out on top of this field was Sandeep Varma aka ‘effuno’, who walked away with the top prize of INR 46,610.

71 players were paid out a minimum cash of INR 918 in this event and Varma walked away with the biggest prize. He defeated ‘Abhijeet1991’ in heads-up, who also received a decent prize of INR 29,336 for second place. In the final hand, both players went all-in pre-flop, after having nearly similar chip stacks. The board ran dry and Varma’s pocket tens triumphed over his opponent’s pocket deuces.

Gutshot had a word with this latest IOPC winner. The 33-year old is a mechanical engineer from Kerala, who completed his Masters in Race Car Aerodynamics from University of Southampton. Poker is the biggest passion in his life, apart from fitness and motor racing.

He told us about his introduction to poker, saying, “The first time I got a computer, I was into a lot of online games, including chess and card games. That’s how I found out about poker, sometime after my higher secondary. I played a few freerolls on 10bet poker. After my MS, while still in UK, I started playing poker again. I received a few books from twoplustwo as part of promotions. This helped me learn the game better and pursue it as a profession.”

Further, he spoke about this IOPC victory, saying, “I registered very late in the event, but had 4 re-entries in my attempt to quickly build up a stack. I chipped up quite frequently thereafter. On the final table, as a marginal chip leader, I overbet all my chips on turn with AK on a K high board and got called by the other large stack with KT, giving me a significant chip lead. I did lose some of it and we were even-stacked 3 handed after some bad beats, but I had built up enough of a lead to cushion those swings. This enabled me to eventually take down the tourney.”

“This was my first win of IOPC. After the disappointment of finishing only 4th in mega stack, despite having been a massive chip leader 5 way, I was determined to play better, pick my spots judiciously and wrap up a win. I intend to continue playing all IOPC events and give it my best,” Varma added.