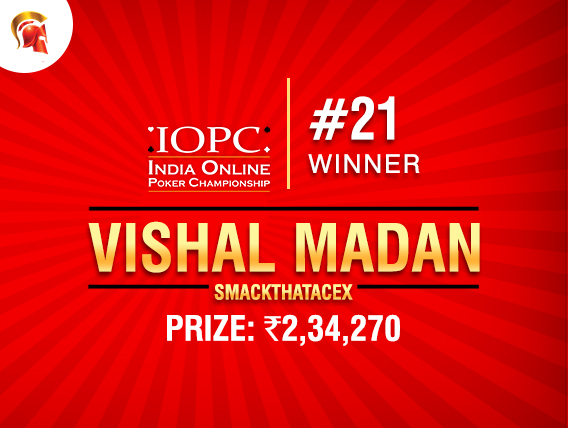 It was a thrilling day of poker on the virtual felts yesterday at The Spartan Poker, where the cash rich India Online Poker Championship (IOPC) is currently taking place. Yesterday was Day 4 of the tournament series and quite a few winners took home big pay-checks for their performances.

After a few hours of grinding, heads-up play began between Vishal Madan aka ‘SmackThatAceX’ and ‘genky’. The former had built a lead of nearly 8:1 and he shipped the tournament as well, taking home INR 2,34,270 for first place while genky had to settle for the second-place prize of INR 148,808. The players shoved all their chips into the pot pre-flop and SmackThatAceX won with an Ace-high flush over his opponent’s three of a kind sixes.

Vishal Madan is a 24-year old poker player from Indore who began his poker career 4 years back, on Zynga. Gutshot caught up with Madan after he shipped this tournament. “I played for real money with friends 5/10 Rs cash and then picked up from there and grinded cash every day for 5-6 hours. When the MTT scene was growing, I gave it a shot and now, I haven’t played a single cash game hand in the last 2 years,” Madan told us about his poker start.

He spoke about the tournament itself, saying, “I actually bubbled the FT of Mega Freeze and had only one table left. I had my complete focus here. When 27 people were left, I was 1/27 sitting with the likes of Sumit Sapra, Spectre, GoMuckYourself in the mix. The remaining field was reggy final two tables. Till the FT, I kept building pressure on the short stacks. When I reached FT, Sapra was holding 50%+ chips in play and was I was second in chips. I just avoided spots against him and exploited when he was not in hand.”

“I was pretty comfortable with other stacks so shallow as they had only one option to push/fold, so I kept exploiting. I certainly picked spots and kept 3-betting Sapra from SB and took down many pots and became CL. FINALLY the key hand was in 3-way when I called Sapra’s 13bb push with KTs and I spiked a king. I had 6:1 CL in heads-up, which lasted only for 1-2 hands. I shoved AQs he called K6s and he was dead on the turn,” he continued.

Speaking about his future in poker, he said, “I want to grow as player and what I think is #TheGrindNeverStops. So, you have to continue never looking back.” Keep reading GutshotMagazine.com for more updates on the India Online Poker Championship.