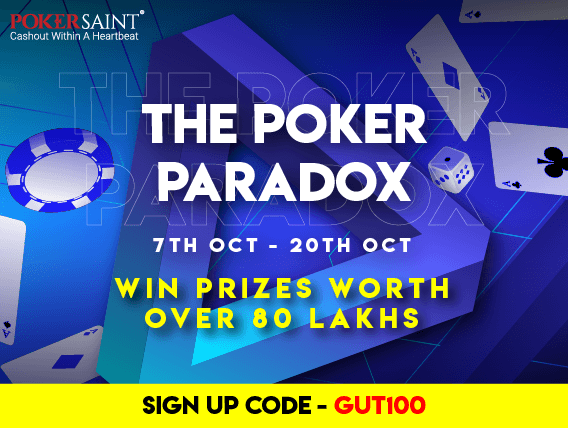 PokerSaint (sign-up with code “GUT100”) is one of India’s leading online poker platforms, especially when it comes to cash game promotions for its loyal user base. Every couple of weeks, the company launches a new cash game promotion and the latest one is known as ‘The Poker Paradox’ which is divided into two promotions.

NLHE is the most popular variant of poker but this promotion has two separate races, one for NLHE players and one for PLO players. As much as INR 80+ Lakh can be won in the next couple of weeks. The promotion lasts between 7-20 October and players around the country have already begun working towards the many exciting prizes on offer.

The Poker Paradox has rewards for everyone, including both the high stakes as well as the low stakes poker players. The different VIP Races are divided on basis on the stakes you play, and these categories include:

Along with daily leaderboard prizes, you can win overall prizes over the course of the promotion. If you play the NLHE promotion, you can win a brand new KTM 390 Duke on the Diamond Leaderboard, for which you will need to earn 105 VIP points on 100/200 and above stakes.

Similarly, in the PLO competition, you can win several electronic gadgets, vehicles and much more including the top prize of a Ford EcoSport which you can redeem for 160 VIP points playing the Diamond Leaderboard of the same stakes. However, everyone is a winner as you can redeem prizes starting at as low as 15 VIP points too.

So, what are you waiting for? We’re already a couple of days into The Poker Paradox promotion, so head to PokerSaint (sign-up with code “GUT100”) and begin the grind right away! Also, stay tuned to GutshotMagazine.com for similar updates on the top poker promotions in India.