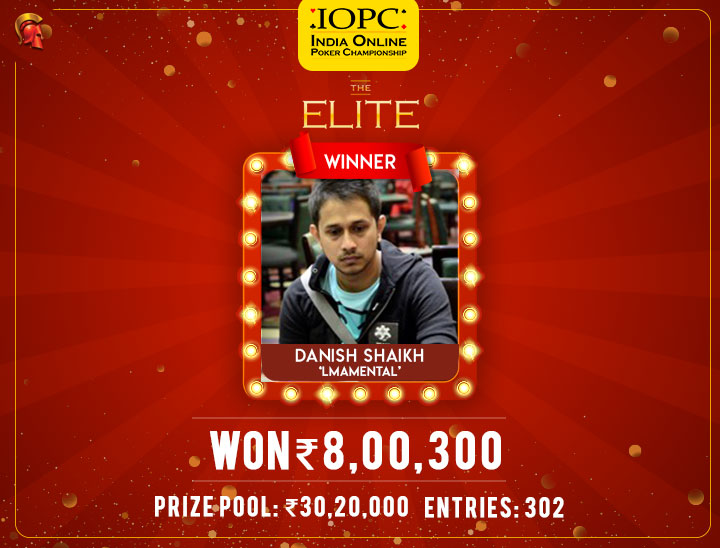 The biggest online poker series of the country India Online Poker Championship began yesterday and saw its Day 1 on TheSpartanPoker.com on 12 Jan. The 10-day series has already kicked off and saw a huge turnout crushing the guaranteed prize pools with massive entries. Don’t forget every winner of this IOPC is entitled to receive a merchandise specially designed for IOPC Jan 2018. The 54 tournaments of the series have guarantees over ?6.5+ crores; the biggest ever guaranteed tournament series the country will ever see. Just like any other tournament series this time IOPC has come up with some big and exciting gifts for the IOPC leaderboard winners and that is none other than the Jeep Compass. Yes! The leaderboard winner will be rewarded with a Jeep Compass and rest of the top 9 places will be given cash in chips.

Yesterday saw the conclusion of Day 1. Let’s take a quick tour of all the events. Today there are five other tournaments scheduled with a featured tournament ‘Dare Devil’ guaranteeing ?6,00,000 for a buy-in of ?4,400.

Outlasting these 1K+ entries was ‘Jack Spade’ claiming the first title of the series for ?90,714. ‘Jack Spade’ defeated ‘tinderplus’ in the heads-up battle where ‘tinder plus’ took home ?55,824 for the second-place finish.

The final hand of the tournament came in Level #47 with the blinds running hot 80,000-1,60,000-16,000. Just like many final hands of the tournaments both the heads-up players pushed all chips in pre-flop. ‘tinderplus’ was holding 8h 7h and ‘Jack Spade’ was sitting with pocket Kings (Kc Ks). The board Qd Tc 7d 6h Ac didn’t help ‘tinderplus’ and ‘Jack Spade’ took the title.

Sahil ‘Variance’ Agarwal emerged victorious in the second tournament defeating ‘Tuffcookie’ in the final round. Agarwal collected ?87,620 for the first-place while ‘Tuffcookie’ took home ?53,920 for the second-place. Agarwal has shipped many titles in past including Spartan Super Series (SSS) Super HighRoller tournament and he has also shipped a Destiny title from the series.

Speaking to Agarwal, he said, “Great to kick off the 10-day long series on a winning note. Hoping to have more such scores and hopefully have a shot at winning the huge leaderboard.” The re-entry tournament drew 674 entries making a prize pool of ?3,37,000 where top 50 places took a share of the prize pool with a min-cash of ?1,685.

The third event of the day saw 491 entries creating a prize pool of ?3,92,800. The tournament saw top 40 places getting paid with a min-cash ?2,357. It was ‘Beenu’ who took down the title for ?104,092 while the second-place finisher Aryan ‘kinginthenorth’ Chaudhary took home ?64,812. Speaking to Chaudhary, he said, “This time IOPC has come up with some super awesome guarantees and it makes worth for these long hour sessions. The structure of the tournaments is really good.”

The winner of the third event was announced in Level #38 with the blinds 17,500-35,000-3,500 where ‘kinginthenorth’ had Th Ad and ‘Beenu’ was holding Td 4s. The raise and re-raise pre-flop saw both the players going all-in where the showdown saw 4h 9h Qh 2d 8d which gave a pair of fours to ‘Beenu’ and also the title.

The daily feature tournament The Elite which is also the HighRoller tournament of the series saw a participation of 302 entries crushing the prize pool and making it to ?30,20,000. The tournament saw top 30 places with a min-cash of ?21,140.

The tournament was shipped by none other than a very known player in the poker circuit and an India Poker Championship winner Danish ‘lmaMental’ Shaikh. Shaikh has bagged many titles in the past claimed this big title for ?8,00,300. Shaikh outlasted Spartan’s first Millionaire winner Manoj ‘kissmyaces’ Pentakota who collected ?4,98,300 for the second-place finish.

Speaking to Shaikh, “I love 6-max, it’s been my main game for over 2 years now. FT was really soft had only one good reg rest were recreational players committing ICM suicide. I messed up a hand early in HU apart from that I don’t think I made any drastic mistake.”

The heads-up battle between ‘lmaMental’ and ‘kissmyaces’ ended in the Level #46 with blinds 27,000-54,000-6,750. The heated HU saw these players shoving pre-flop with ‘lmaMental’ (As Th) and ‘kissmyaces’ holding 5s Ks. The board quickly ran Qd 6c Jd 4h Qc which gave a pair of Queens, but ‘lmaMental’ claimed the title with the Ace kicker.

The last event of the day Progressive Knockout where the buy-in of the tournament was ?2,200 and bounty of ?1,000 which totals up to ?3,200. One of the Destiny winners from Destiny 3.o Aditya ‘SuperuSer’ Sushant made a superb entry into the IOPC winners. ‘SuperuSer’ outlasted 400 entries and ‘saksham22’ in the heads-up battle. ‘saksham22’ collected ?128,320 for the second-place finish.

Speaking to Sushant, he said, “Happy to have started IOPC on right note. Come one, come all. Taking all bets for leaderboard. Jeep Compass se nazar hatao.”

Have a quick look at the updated leaderboard: 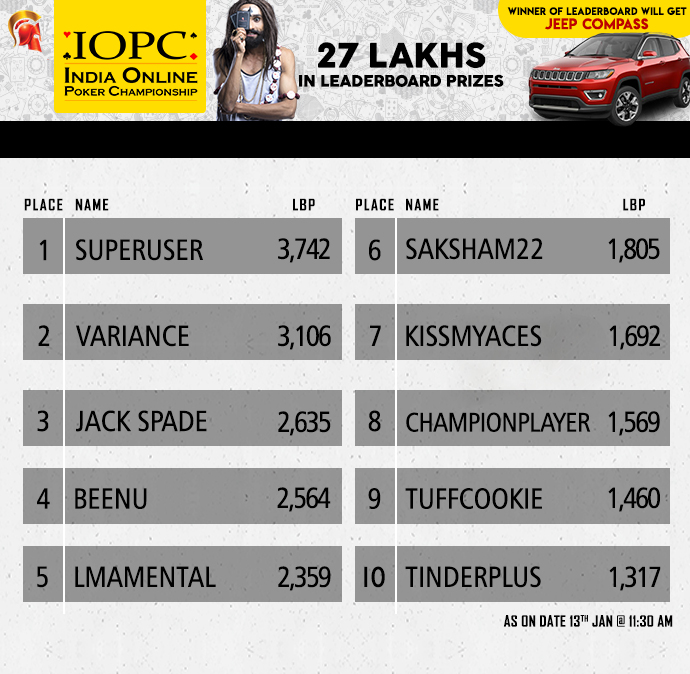