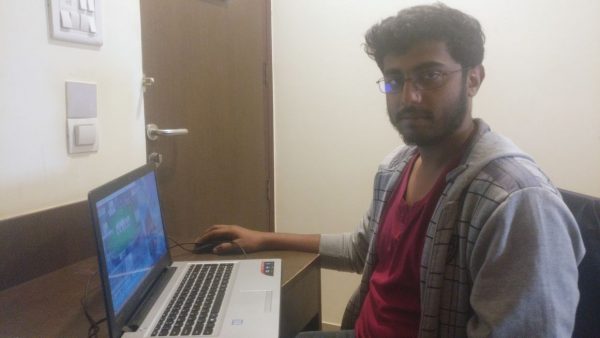 Day 2 of the ongoing India Online Poker Championship (IOPC) at The Spartan Poker was done and dusted in the early hours of this morning and we have another five winners who walked with the big prizes outlasting massive fields in their respective tournaments. The big winner was Rohit ‘Romoid‘ Mishra who claimed the big title of the night i.e. DareDevil for a first place prize of INR 408,630. Along with the IOPC fever, TheSpartanPoker.com left no stone unturned as they have launched a cash game promotion called Play Max where the eligible stakes are 25/50 and 50/100. The promotion is scheduled from 14-22 January and the player who plays the maximum number of hands will top the leaderboard which carries an INR 5 Lakhs prize. The winner of the leaderboard will get a prize of INR 2,00,000 cash in chips as well as a ticket to every poker player’s dream destination; Las Vegas.

Coming back to the biggest series of the country, let’s take a quick round-up of the second day’s action at the IOPC:-

The very first event of the day drew 626 entries to crush the prizepool and make it into INR 313,000. This big prize pool of the day was distributed to top 50 places with a min-cash of INR 1,565. ‘nik55’ emerged victorious in this event to claim the title for INR 81,380. ‘nik55’ defeated December 2018 Millionaire Samay ‘Limitless’ Modi in the face-off where Modi collected INR 50,080 for the second-place finish.

The re-buy +addon tournament saw 919 participations in total to create a prize pool of INR 367,600. Top 40 places took a share of the prize pool with a min-cash of INR 2,206. Coming on top was ‘Viserion’ who took down the title outlasting these entries for a prize of INR 97,414. ‘Viserion’ defeated ‘jaspkr’ in the heads-up battle where the second-place finisher took home INR 60,654 for the finish.

The winner was announced in Level #43 with blinds running 40,000-80,000-8,000. The heads-up players ‘Viserion’ had Ad Ah and ‘jaspkr’ had 9c Kd. Just like any other final hand in the last hand both the players went all-in pre-flop where the showdown Ts Td 5h 2h 5s gave two pairs, Aces and Tens to ‘Viserion’ along with the title.

One of the weekly featured tournaments scheduled in IOPC, DareDevil where the player loses all his/her chips and wish to rebuy, the payers will put INR 2,200 (2,000+200) for the same starting stack. The big event of the day saw 539 participants came together to make a prize pool of INR 15,42,000.

24-year old professional poker player, Rohit ‘Romoid’ Mishra claimed the DareDevil title for INR 408,630. Bangalore based Mishra, said “IOPC has been a great way to start the year. I am really excited for today’s Two of a Kind and the SuperStack tournaments, looking forward to ship both.”

The winner was announced in Level #46 with blinds 27,000-54,000-6,750 where ‘Romoid’ had Jd Jc and ‘saksham22‘ was holding Kd Qc. The betting ended on the river where the showdown saw 8c Jh 3d 4c Ks which gave three of a kind, Jacks. ‘Romoid’ took down the title of DareDevil eliminating ‘sakshan22’ in the second place.

The last event of the day saw 621 entries making a massive prize pool of INR 12,42,000 where top 50 places took a share with a min-cash of INR 6,210. Vikram ‘NeuroScientist’ Singh claimed the last event of the day defeating ‘Viserion’ in the heads-up battle. ‘NeuroScientist’ was rewarded INR 322,920 for the first-place finish while the second-place finisher ‘Viserion’ collected INR 198,720 for the finish.

Singh started playing poker more than a decade ago and also had multiple achievements throughout the time. After winning the tournament 32-years old Singh said, “Winning an IOPC tournament was a great experience and the deep structures the series offers made navigating the Final Table feel like an achievement for myself and a maturity in both the value and excitement offered at Spartan Poker.”

Speaking about the final table key hands, “In one of the key hands where I had 40bb effective and on the Final Table, I flatted 3bb from an early position raise. The original raiser checked and I value bet my top set – 5.4bb into a pot of 8.12bb. The turn was a bad card for me and given the option in position, I checked back. Sometimes I will bet big on the turn and fold to a raise but usually that works better out of position. The river was a great card and I targeted a bluff-catcher and somewhat nutted range like a straight. What that bet accomplished was a call from Ace high and I am pretty sure that a straight or 5s or 7s full would raise and value own themselves. Blocking combos like 68s, 78s etc. and there being no flush on the board meant the range to be targeted has to be a bluff catching range that will spew if it better than just a bluff catcher.”

With Day 3 currently in full swing, it is Chennai’s Aditya ‘SuperuSer’ Sushant who continues to maintain his top position on the leaderboard and if he continues to do so till the end of the series, he could very well walk away with a Jeep Compass automobile that’s being given away as the top prize. Here is the leaderboard: 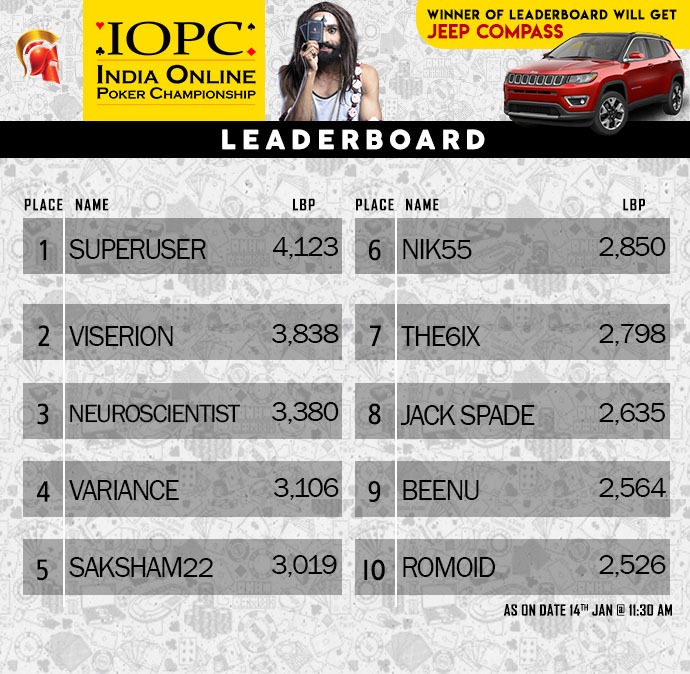