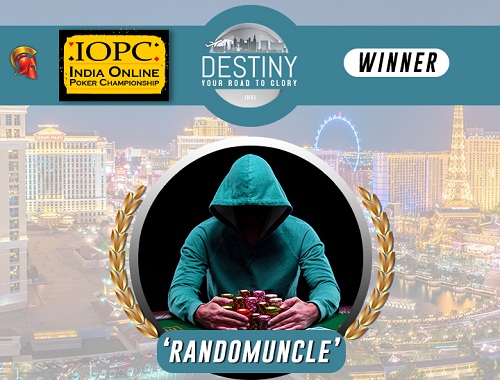 Jeep Compass! Jeep Compass! Jeep Compass! The only thing which is running through the minds of every poker player in India. Yes! The ongoing India Online Poker Championship (IOPC) is giving away to their leaderboard winner a brand new Jeep Compass. The leaderboard comprises of Jeep Compass to the first place topper and cash in chips prizes to the rest of the 9 toppers of the leaderboard. After shipping Two of a Kind, ‘GoMuckYourself’ is on the top place of the leaderboard maintaining his lead with 11K points. Following him is Guruprasad ‘gurupoker’ Gupta at the second place with 7K points. Let’s talk about tournaments now. It’s the seventh day of IOPC where yesterday night (IOPC Day 6) saw ‘randomuncle’ shipping the Destiny tournament and grabbing a seat at the Destiny SnG Finale which will be held on 18th March this year at 6:30 pm.

Let’s do a quick round-up of IOPC Day 6 tournaments and their winners: –

The very first event of the day drew 617 entries to create a prize pool of INR 308,500. The prize pool was collected by top 25 places with a min-cash of INR 1,851. ‘MachoMoron’ outlasted these entries to ship the first title of the day for the first-place prize of INR 81,752. The mysterious id ‘MachoMoron’ said, “It feels great to ship the event, I had a good stack from the starting and I maintained it. However, on the FT I became the shortest at one point but I doubled up with AK v Q10 s on a K64 two clubs board. My king pair held. After that it was not very tough as I had 2:1 chip lead and I won it.” ‘MachoMoron’ defeated ‘saksham22’ in the heads-up battle who collected INR 50,131 for the second-place finish.

The second tournament of the day saw a participation of 477 entries where the prize pool was crushed and made it into 286,200. Top 30 places took a share of the prize pool with a min-cash of INR 2,003. ‘Juwadi’ came on top to outlast these entries and defeat ‘yoyoyo’ in the final face off. ‘Juwadi’ took home INR 75,843 for the first-place finish while ‘yoyoyo’ collected INR 47,223 for the runner-up finish.

The third event of the day was a Knock-Out tournament which saw a total number of entries of 358. With a min-cash of INR 1,000 top 50 places took a share of the prize pool. The event saw a similar face Vikram ‘NeuroScientist’ Singh who recently claimed a side event in the ongoing IOPC. Singh outlasted ‘sushant05’ in the heads-up battle to claim the second title in this IOPC series.

The fourth series of Destiny has already begun and last night saw the second Destiny qualifier for Destiny Sng Finale in ‘randomuncle.’ The first-place finisher took a cash prize in chips of INR 7,16,400 and a ticket to Destiny SnG Finale worth INR 1 Lakh. The tournament saw 628 entries which made a prize pool of INR 31,40,000 which was distributed to top 60 places with a min-cash of INR 12,560. 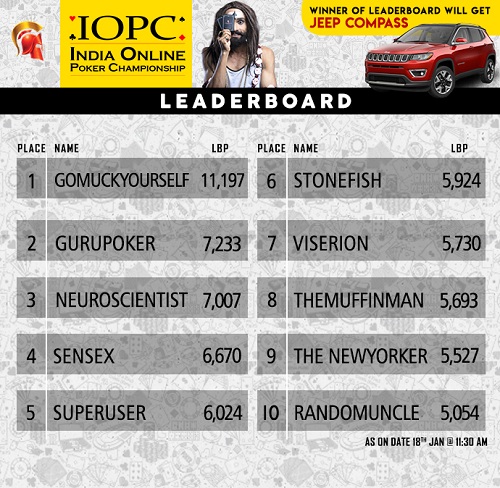 Stay tuned to GutshotMagazine.com for all updates of the IOPC.