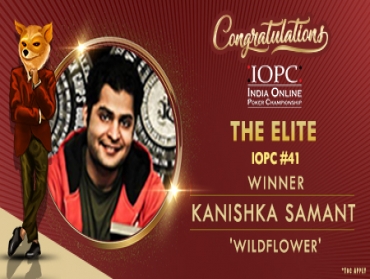 Yesterday, the very well received India Online Poker Championship (IOPC) concluded its Day 8. The day saw a total of 6 tournaments being hosted on The Spartan Poker, out of which one was the signature Spartan tournament Triple Bubble, and the biggest of them all was the Friday feature tournament – IOPC #41 – The Elite INR 50 Lakhs GTD – which had an increase in its guarantee for the IOPC.

The Elite yesterday attracted a playing field of 308 entries (including 72 re-entries) for a buy-in of INR 27,500. The field was a huge one for a buy-in like this and crushed the guarantee and created a prize pool of INR 77 Lakhs.

The winner to emerge from the long 8-hour grind was online regular Kanishka Samant aka ‘Wildflower’, taking home a good pay-check of INR 12,74,534 for his awesome 1st place finish. He took the lion’s share of the prize pool after a 3-way deal between him, ’Crime_Master_Gogo’ and ‘pokerkilll’ who got INR 11,68,724 and INR 10,54,851 respectively.

Samant is a regular player on Spartan as well as other platforms and has accumulated plenty of titles and cash previously. He also won Spartan’s Sunday SuperStack in May 2018 for over INR 5.7 Lakhs. He is a well accomplished live player too, having played across the Asia-Pacific region, including places like Manila, Ho Chi Minh City, Macau, Gangtok, and Goa. His best live win came in 2015, when he shipped the IPC Main Event for INR 11,50,000.

We had a short interview with Samant after his spectacular finish yesterday:

How does it feel shipping an IOPC title among a tough field?

It’s a good feeling. I’m very happy to chop the event and end as winner after finishing 2nd twice last month. I loved the structure and the 6-Max format where everyone was battling it out for every single pot.

What was the major turning point for you in the tournament?

I kept chipping up throughout the tournament but the turning point was when there were 14 players left and I won a huge pot against ‘PeterPunter’ (Siddarth Singhvi) to take the chiplead and from there onwards I maintained it through the end of the tournament.

Who would you term as the toughest competitor?

Being the High Roller, there were a lot of good players viz.Sahil Chutani ($lim$hady19), Akshay Nasa (sherlock52), Siddarth Singhvi (PeterPunter), Aditya Sushant (SuperuSer) and a few users whose names I’m unaware of but were playing a sound game.

The Final Table must’ve been a tough one since it was studded with regs and pros. India’s first WSOP bracelet winner Aditya Sushant aka ‘SuperuSer’ was also playing in the Elite and finished well at 4th for INR 6,26,780. Varun Gupta aka ‘VG92’ was also on the FT and busted at 6th for INR 3,76,530. Yesterday, Gupta also shipped Adda52’s Whale 6-Max title and is doing well lately. IOPC #29 winner ‘bigphish’ finished 8th for INR 2,00,970. Ankur Aryan aka ‘showstopper89’ finished 9th for INR 1,66,320, coming from shipping an event on IOPC #15 SuperStack last Sunday.

Today will be the penultimate day of IOPC and has  five events lined up, biggest of them is the PLO HR, so stay tuned to GutshotMagazine.com for first updates on today’s results as well as for general poker news from around the world.