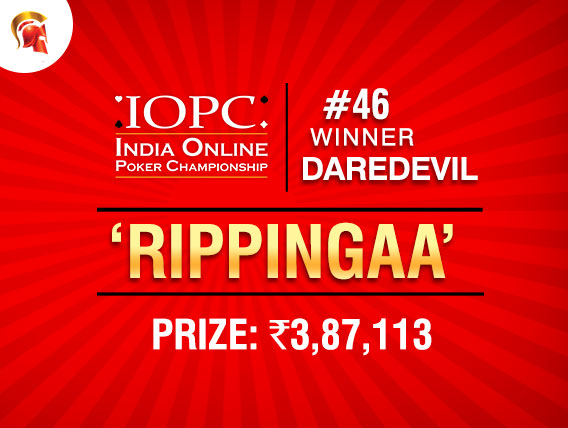 Saturday evening’s featured tournament at The Spartan Poker is the DareDevil and it is quite the player favourite given the value it provides to its participants. That value was significantly bumped up for the IOPC series with the guaranteed prizepool taken up to 15 Lakhs. The player who claimed the lion’s share of that huge prizepool by remaining at the top when the dust settled was ‘RippingAA’ who outlasted the field to claim the title.

The DareDevil’s format allows players to buy-in for INR 5,500 and it follows a Rebuy format. However to make things interesting the busted players who choose to rebuy are able to do so at a 50% discount on the original buy-in. This makes it incredible value for players are some very juicy payouts especially up top. Those payouts went up even more than usual as 166 entries took the prizepool well past its original guarantee making it INR 16,65,000 that would eventually be distributed out. In-the-money finishers were assured a minimum payday of INR 19,314. A total of 23 players would share that prizepool in a tournament which went on for the better part of 6 hours.

A few well known names were in the top 10 finishers including ‘alienrobot’ (9th place for INR 38,628), ‘Quickgun24’ (6th for INR 89,077) who in fact finished runner-up to alienrobot in an regular edition of the DareDevil earlier in the month and June’s PLO Super Highroller winner Vishal Tulsyan at the Spartan Super Series. When action came down to three-way, it was ‘Shash26’ who was eliminated in second runner-up by RippingAA when the latter made two pair against Shash26’s single pair. Shash26 made a score of INR 1,74,825 for his efforts.

RippingAA then went up against ‘Dark fish’ for the title holding a commanding lead of 3.1 million chips as compared to the 641k stack of his opponent. That did not deter the short stack however as he clawed his way back to make the stacks near even. However RippingAA was also proving to be rock solid. Plenty more pots of smaller values were traded between the two till the final hand happened. A checked flop of 5c 6d 7c brought mid-pair for RippingAA (6s 9s) while Dark fish found himself with a straight draw on holdings of 8c Kd. It was an all action flop as both players got their chips into the middle. But two Aces on the remaining streets meant RippingAA would take down the DareDevil with two pairs, Aces and Sixes and first prize of INR 3,87,112. Dark fish’s runner-up finish netted him a score of INR 2,62,237.

The last two events of IOPC Day 9 were also quite action packed and we will bring you those updates right here on GutshotMagazine.com.