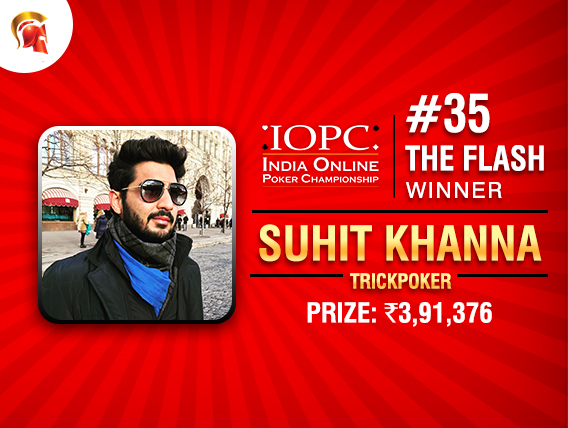 Last night would’ve been one to remember for poker players across the country, as Day 7 of the ongoing India Online Poker Championship (IOPC) saw a number of high guarantee tournaments taking place. One of these tournaments was The Flash, with an INR 17.5 lakh advertised prize pool.

6 hours and 2 minutes after the tournament began, we finally had a winner. It was Suhit Khanna aka ‘trickpoker’ who outlasted these entries and received a hefty payday of INR 3,91,376. Khanna defeated ‘Abby2038’ in heads-up, who had to settle for the runners-up prize of INR 2,60,202.

The guarantee for The Flash was boosted for the IOPC and Khanna would’ve been a happy man after this win. It was Level #47 of the tournament when the winner was declared, when the blinds were running 30,000/60,000 – 7,500 and Khanna holding slightly more than a 2:1 chip lead before the final hand.

In this hand, Abby2038 decided to go all-in pre-flop, with a strong hand of K-9. Khanna held A-6 and made the call, with the flop opening 8-9-J and Abby2038 taking the lead. However, Ace opened on the turn, giving Khanna the lead and the Q on the river didn’t improve anyone’s hand, thus allowing Khanna to win the pot with a pair of Aces.

Gutshot caught up with the winner after the tournament. Khanna is a 28-year old resident of Ahmedabad, who is a Bitcoin Consultant and he considers himself a PLO specialist. He told us about his introduction to the game of poker, saying, “I started playing back in 2008, when I was living and pursuing my Bachelors Degree in Singapore. Some of my roommates there introduced me to the game, and have been playing ever since”.

“I have played in a couple of the previous IOPCs and few other promotional events, I think they are well structured events especially for someone like me who is a business professional. The timings are great too. I think The Spartan Poker is doing a great job of running these promotions. From planning to execution they are doing a lot of things right. Apart from that they are growing the game in general. So kudos to the entire team at Spartan,” he said about playing tournaments on Spartan.

Around 20 tournaments are still to be played in this edition of the IOPC series. Keep reading GutshotMagazine.com for similar updates on all those tournaments.