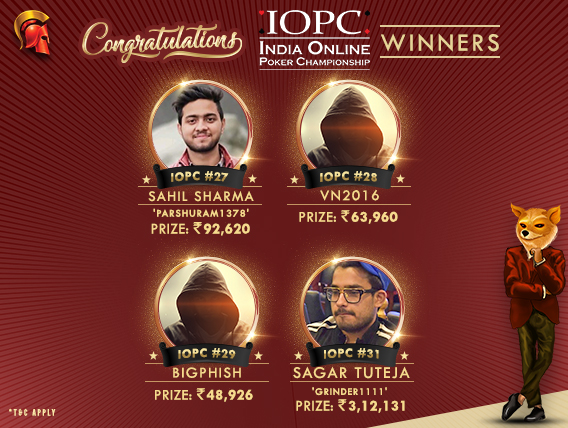 After five days of action-packed events hosted on The Spartan Poker in the ongoing India Online Poker Championship (IOPC), Day 6 of the series got over yesterday with a total of 5 winners declared. The series has an enormous INR 8.5+ Crores in total guaranteed prizes.

Yesterday’s IOPC saw the biggest tournament of the day, Destiny INR 30 Lakhs GTD, being hosted on Spartan and the winner to emerge from that was Nishaanth Shanmughasundaram who shipped it for a staggering INR 11,01,250. Other events of the day are as follows.

The series began first with a smaller INR 3 Lakhs GTD NLHE, but the tournament itself wasn’t small, as it attracted 199 total entries and crushed the guarantee with a fresh prize pool of INR 4,21,000. Out of the top 27 places paid, the largest cash prize earner and the winner of the tournament came to be Sahil Sharma aka ‘Parshuram1378’. He took home INR 92,620 after beating ‘Xora’ in heads-up.

The final hand was played at Level 39 with blinds at 30k/60k/6k. The eventual winner had already amassed almost 6:1 chip lead leading to the final hand. His opponent went all in with pocket Tens and Parshuram1378 called with Kh Jh. Until the turn, Xora would’ve won the hand, but the river of Kc made a King pair for Parshuram1378, who took home the title. The runner-up had to settle for INR 62,729.

We spoke to the Jammu-based winner, Sharma, after his win. He elaborated on the overall experience and background by saying, “I started playing poker around 7 months ago, being introduced to it by my brother Harsh. This was my first IOPC and all the tournaments in it have very good structures. I had some deep finishes but couldn’t make it to the Final Table.”

Talking about his gameplay leading up to the win he said, “At one time yesterday, I was 14/14 and had 9 big blinds and managed to finally reach the Final Table. Entering heads-up, my opponent had 3:1 chip lead, but he was opening very wide which helped me a lot and I later shipped the tournament.”

The tournament attracted 276 entries, more than last tournament’s, and made a prize pool of INR 3,19,800 from which the top 36 places were paid. The winner to emerge from this was ‘vn2016’ who bagged the title and the 1st place cash prize of INR 63,960, beating ‘quick silver’ in heads-up. The winner is a regular player in the online circuit but wishes to remain anonymous.

The final hand of this again saw a pre-flop all-in where the eventual winner shoved with Ac 5c. His opponent called with 7h Kh but the board made an Ace-pair for vn2016 on the flop itself and that was enough to beat his rival’s Ace-high hand. The runner-up took home INR 44,772 as 2nd place cash prize.

We spoke to the winner of this event after and he was delighted about his win and said, “I was leading in the tourney for the most part but just before the Final Table, I took a big call with a top pair and weak kicker, and suddenly, I was in the bottom half. From there, it was a mix of some tight aggressive play and benevolence from the poker gods which helped me ship the event. Thanks to Spartan for hosting a lovely IOPC.”

The next in the line-up of events for Day 6 of IOPC was the INR 2 Lakhs GTD Knock-Out. This one again crossed the guarantee and created a prize pool of INR 2,53,500 for attracting a field of 507 entries. The player to finish 1st in this event was ‘bigphish’, who took home INR 48,926 after beating an accomplished regular in heads-up – Ashish Ahuja aka ‘Spewushhhiiiii’. Ahuja has shipped many bigger tournaments in the past.

The final hand was pretty even in terms of chip counts. bigphish shoved his stack of 1,357,400 and Ahuja called with pocket Fours. Little did he know that bigphish was packing pocket Nines. The board ran dry but it didn’t matter in the end.

We spoke to bigphish after his victory, “I really loved playing the Knock Out (KO) tournament. IOPC has been very exciting.” Indeed, knock out tournaments are very much a favourite among poker enthusiasts. The winner will be looking to ship a few more with this good boost to his bankroll.

The last of the tournaments for the day was an INR 12 Lakhs GTD NLHE. The tournament saw a total of 615 entries, all coughing up the INR 3,300 buy-in in hopes to convert it into over INR 3 Lakhs 1st place prize. The prize pool came to INR 18,45,000 and this increased the guarantee by a huge amount.

The player to ship this second highest value tournament for the day was Sagar Tuteja aka ‘grinder1111’ who took home INR 3,12,131 as the 1st place prize. He made a heads-up deal with known online/live grinder and previous Spartan 2.o.K winner Tathagata Sengupta aka ‘vegancannibal’ to bag the lion’s share out of the prize pool. Sengupta also earned a respectable cash prize of INR 2,75,870 for his runner-up finish.

We spoke to Tuteja after his win and said, “It’s always a great feeling to ship a tournament.” He’ll be hoping to make good use of this money by signing up for a few more IOPC as well as other tournaments in the future.

The day ended by breaking all tournament guarantees, which has become quite a regular thing the IOPC. Tomorrow’s IOPC Day 7 will feature 6 tournaments with the biggest event – Super High Roller- having a colossal INR 70 Lakhs GTD. Stay tuned to GutshotMagazine.com for all fresh IOPC updates and results as well as general poker news from around the world.