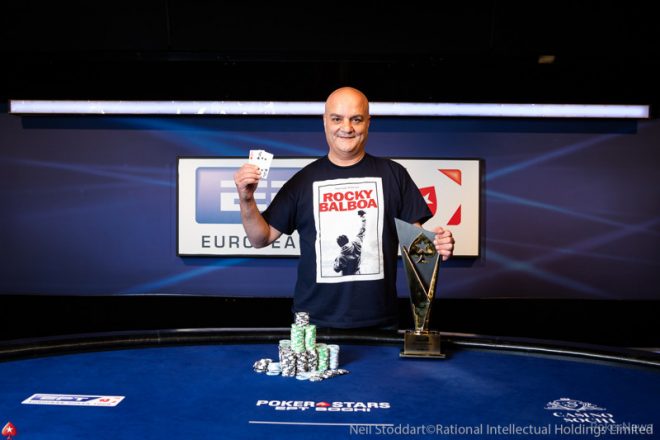 The 2019 European Poker Tour (EPT) Sochi ended successfully at Casino Sochi in Russia. The venue was witness to the prestigious event for the most part of this month. The series ended yesterday with the High Roller declaring its winner. The Indian contingent consisted of strong live players. Two players in particular made headlines, Kartik Ved in the National and Sriharsha Doddapaneni by finishing 26th in the RUB 191,800 Main Event.

Doddapaneni’s run was fantastic as his only investment was the buy-in he put for Destiny tournament on Spartan. He later converted this into the Europe package by winning the Destiny 7.0 SnG and subsequently won ~INR 8.39 Lakhs for his finish in the EPT Main Event.

Winning the Main Event though was Uri Gilboa who earned RUB 27,475,000 (~INR 2.9 Crores). He is also the oldest EPT champion ever as well, with 61 years by his side. He was wearing a t-shirt which said ‘Rocky Balboa’ on the last few days of the series and on the Final Table of EPT ME after his friends told him not to change the t-shirt for good luck.

“I’m glad I’m the first Israeli winner. You have to know that the standard of Israeli poker is becoming tremendous. We’ve had a lot of achievements at the WSOP and at other European tournaments. I know I’m the first, but for sure I’m not the last,” said Gilboa shortly after his win.

The day started with Zakhar Babaev leading 5 other players on the FT. Gilboa, early in the game, banked on the mistakes made by his 2 opponents and doubled up. He began with a middle position in the chip counts but gradually worked his way to face Babaev in heads-up.

After over 30 hands in heads-up play, Babaev 3-bet all-in for 92 big blinds with Ace-nine. Gilboa called with Ace-king and won the pot. He finished off his Babaev’s remaining 6 big blinds and eliminated him at 2nd place for RUB 16,737,000 (~INR 1.77 Crores). Gilboa, with this win, now has over $500k in live cashes, making this one his best score yet.

Keep reading GutshotMagazine.com for more such tournament results and roundups and for general poker news from around the world.