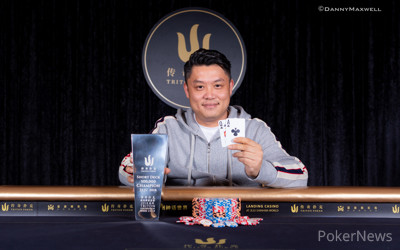 The Triton Super High Roller Series in Jeju, South Korea kicked off on 23rd July, with four high-stakes events being scheduled for the series. The first event came to an end yesterday and it was American poker pro Nick Schulman who shipped that event for HKD 2,135,000 (~$272k).

Leow has over $2 million in live cashes and made the final table twice in the last Triton SHR series in Montenegro. He also made headlines for shipping the High Roller for HKD 1,442,300 ($183,745) at the inaugural OPC Macau earlier this year. Just yesterday, he finished 7th in the Triton SHR Jeju opening event.

“It’s great. I’m very happy. I’ve only been playing short deck for a few months. I started with Wai Kin Yong and all the crew. We learn the game, it’s still a new game,” said Leow. The Malaysian isn’t a professional as yet, but he has been notching up some good scores in the last few months.

For this particular win, Leow pocketed a massive first-place prize of HKD 8,470,000 (~$1,079,586), recording his first 7-figure score and his biggest live cash by a long way. He became the biggest winner of this series so far and we’re set to see a couple of more big winners in the next few days in Jeju.