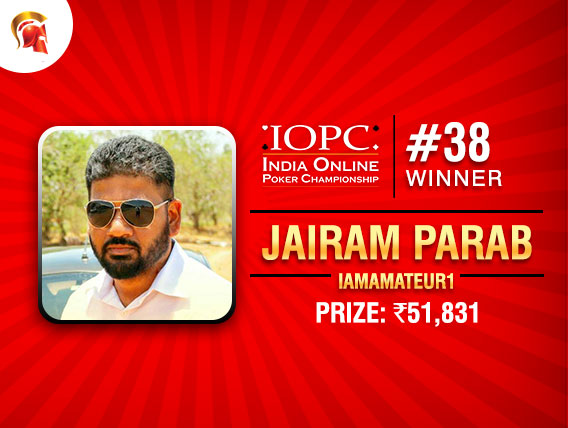 Weekend action kicked off at The Spartan Poker yesterday afternoon with Day 8 of the India Poker Championship getting underway at noon. It was a big day for poker enthusiasts as six events were on schedule for Friday and the man who made a winning start to this day was Jairam ‘iamamateur1’ Parab who won Event 38 at the IOPC.

This 2 Lakh GTD tournament had a buy-in of INR 330 and followed a Rebuy+Addon format. As has been the case right through the past week, that guaranteed amount was crossed and settled at INR 2,34,000 courtesy of the 187 entries who participated in this event. 27 places were paid out with a min payday of INR 2,340. There were a number of familiar names in the list of players who finished in the money. Prince ‘DeadEmotions’ Singh who has been having a good IOPC so far ran deep here as well but was unable to make the final table finishing in 11th place. Pulkit Goyal a.k.a ‘Championplayer’ and former Spartan Millionaire Gaurav ‘NuttieGuttie’ Sharma too made an appearance at the final table and finished in 8th and 9th place respectively. Loveleen Singh who plays as ‘sridevi123’, has already won two titles in this edition of the IOPC and was looking good to make a run for his third title. Holding 7h Ks, sridevi123 decided to move his short stack into the middle which iamamateur1 called with Ac Jh. The flop Qh Jc 3d 4c 9h paired iamamateur1 up and that put paid to Singh’s hope of scoring another title.

Heads-up battle then began between ‘Plumber’ (991k) who was significantly outstacked by iamamateur1’s 3.3 million chips. This battle did not last for too long with a few small pots being exchanged between the two. Plumber managed to cross the million chip mark but still needed a double up to make things even when this hand happened.

Holding pocket Tens (Th Tc), iamamateur1 raised it up to 72,000 which was called by Plumber holding Qd 9h. The turn card on a board of Jc Kc Kd Td 8s gave iamamateur1 a full house Tens full of Kings and with that the first title of IOPC Day 8 went the way of Jairam ‘iamamateur1’ Parab along with first place prize of INR 51,831 while second place finisher Plumber got INR 34,983.

Gutshot caught up with Parab after this win. He said, “I was running pretty bad throughout the iopc until this tournament. I ran pretty hot to reach the final table. There were lot of good players on ft. I’m glad I could secure the win despite making couple of mistakes. Looking forward to to play IOPC main event. Kudos to The Spartan Poker.”