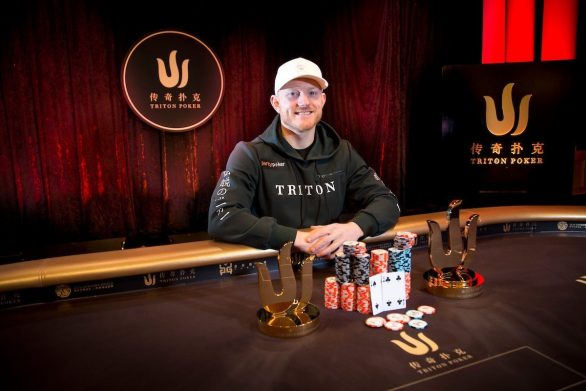 The Triton SHR Series went into the books yesterday, 9th March 2019. The high-stakes series, co-founded by Paul Phua and Richard Yong, was hosted between 2-9 March 2019 in Landing Casino, Jeju, South Korea. Timothy Adams won the Main Event in the series for a colossal pay-check of ~$3.54M.

Apart from the Main Event, which was obviously the highlight of the series, a novel tournament called Event #7 HKD 1 million NLH Triton Refresh filled in as the last tournament of the series. This is the first time Triton has decided to host the event and yesterday, the champion of this event was declared to be American pro and Triton Ambassador Jason Koon.

Koon took home HKD 7,640,160 (~INR 6.8 Crores) after a heads-up deal with UK’s Stephen Chidwick who received the bigger cash prize of HKD 8,859,840 awarded. The event saw a total of 25 entries signing up including the likes of Mikita Badziakouski, Michael Soyza, Sam Greenwood, Mathias Eibinger, and others.

“It’s ridiculous to sign up for six tournaments and turn up and final table four of them, and win two of them. It doesn’t happen very often. I’ve run extremely, extremely well, but that’s what has to happen. Some weeks you run good, this week I ran fire hot,” said Koon after his win.

The Refresh tournament wrapped up within a day and Koon became the champion at around 4.30 am local time yesterday, or today to be precise. When heads-up was reached between Chidwick and Koon, both were with pretty even stacks and no one had an edge over each other. They finally decided to make a deal which saw Chidwick get the higher amount with the title to play for.

Both heads-up players requested the managers of the series to increase blinds after every hand so that play hastens. Eventually, Koon won the trophy and the title, beating Chidwick’s Queen-high with Fours and the series came to an end.

With this, Koon has now earned his 3rd Triton title, two in this series and the first one in 2018 in Montenegro. He now sits with almost $28 million in total live cashes and 6th in USA’s All Time Money List too. He has also propelled himself even higher in the worldwide poker scene with these wins. Top 4 Pay-outs –

Keep reading GutshotMagazine.com for more such tournament results and roundups from around the world.