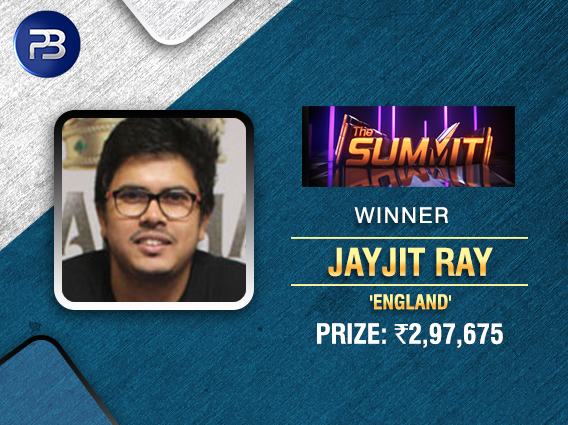 It was just around a week back from today that Kolkata’s Jayjit Ray won a tournament at the Baadshah Live series in Goa. He beat Rajeev Kanjani in heads-up to win the INR 75k Highroller on board the Casino Pride in Goa, taking away the top prize of INR 9 lakh after a grind that went on all night.

He then decided to take this form into online poker as well, last night winning a major online poker title on PokerBaazi, where he plays under the name ‘england’. PokerBaazi hosts featured tournaments every day of the week but Thursday night’s The Summit INR 10 lakh GTD is easily one of their most popular offerings.

As it does each Thursday, the tournament kicked off last night at 8pm and attracted a total field of 162 entries (81 players + 81 re-entries). The INR 8,250 buy-in tournament attracted a competitive field and took the prize pool up to INR 12.15 lakh which was eventually shared among the top 13 players with a min-cash of INR 30,375.

The tournament came to an end at 2:10am this morning, with many of the players also playing Spartan’s Super High Roller simultaneously. Gutshot congratulated Ray immediately after he won and asked him what it felt like to win this tournament. He said, “It feels really good to finally reach THE SUMMIT.”

To wrap up things for the night, Ray beat ‘SharkTank’ in heads-up, taking away the mega prize of INR 2,97,675 for first place. SharkTank wouldn’t be too disappointed either, pocketing INR 2,24,775 for finishing second. Among other known players on the Final Table were Kartik Ved aka ‘TheInternetKid’ who finished 4th for INR 1.27 lakh, Rohit Mishra aka ‘rohit22rm’ who finished 5th for INR 91,125 and Lakshay Grover aka ‘BaazigarIV’ who finished 6th.

Keep reading GutshotMagazine.com for more updates on the top PokerBaazi tournaments as well as other poker tournaments from around the world.