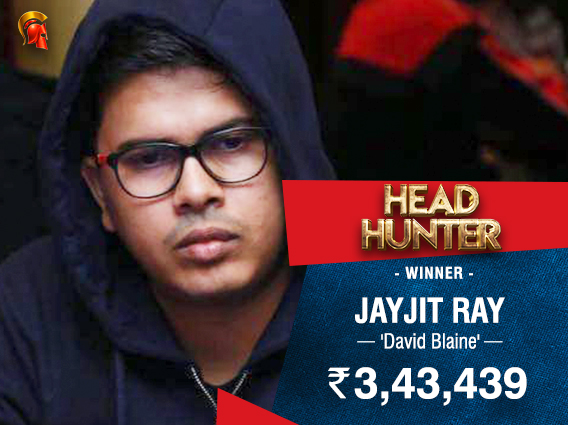 Spartan Poker has a different featured tournament for every day of the week and for Thursdays, that tournament is the Head-Hunter INR 10 Lakh GTD bounty tournament. With a buy-in of INR 5,500, players from around the country were a part of this field where everyone can win from both the tournament prize pool as well as the bounty prize pool.

Beginning at 8pm, the knockout tournament went on for slightly above 6 hours, ending at 2:06am this morning and declaring Jayjit Ray aka ‘David Blaine’ as the champion. Part of the PokerGuru Staking team, Ray has been among the top cashes in several online tournaments in the last year or so and last night, he added another trophy to his cabinet!

280 entries participated last night, and the guarantee was passed with INR 11.2 Lakh to be shared from the tournament prize pool along with INR 2.8 Lakh in bounties. Eventually, 23 players finished in the money but those who finished out of the money also won a bit back through bounties!

Some of the known names to finish in the money were Guneet Kwatra (18th), Sanat Mehrotra (17th), Aniket Waghmare (11th), Sumit Sapra (10th), and others. While the tournament was a tough one, the Final Table was a relatively softer one and Ray would’ve fancied his chances right from the start of the FT.

Eventually, he managed to take down the title to go with INR 3,43,439 in prize money. He won the top tournament prize of INR 2.6 Lakh and the rest from the 19 eliminations that he executed. In heads-up, it was ‘The Philosopher King’ who lost to Ray’s pocket Fives in the final hand, the former having to settle for INR 1,76,400 plus INR 2,500 for four bounties!

For more updates on what’s happening in poker and gaming in India, keep checking GutshotMagazine.com.