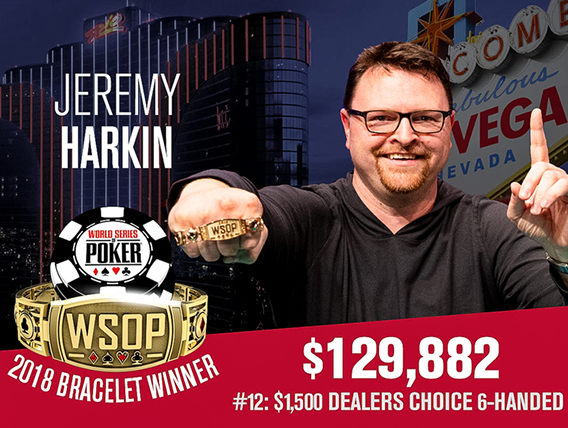 Oregon’s Jeremy Harkin has claimed victory in Event #12 of the 2018 World Series of Poker, $1,500 Dealers Choice 6-Handed. The win, the largest of Harkin’s career, brought $129,882 and a debut bracelet way. Harkin came to the final table with the lead and stayed at or near the top most of the way, though not without a tough fight against Frankie O’Dell and George Trigeorgis, his final two foes. O’Dell, a two-time winner in Omaha hi-lo events and a two-time WSOP Circuit champ as well, staved off elimination and surged to the lead during three-handed play before Harkin reassumed control. O’Dell, like Harkin a Colorado native, pocketed $80,256 for his three days of play.

Finishing third in Wednesday night’s finale was Trigeorgis, for $52,130. This was the second final table in a row for Trigeorgis, who placed fifth in Event #8: $2,500 Mixed Triple Draw Lowball. Scottsdale, Arizona’s Anthony Arvidson placed fourth, earning $34,700. As with Harkin, the cash was the largest of Arvidson’s WSOP career. Harkin’s closing rush foiled O’Dell’s comeback effort. Having ground down O’Dell’s stack for a third time, Harkin ended it all in a hand of Big O, where the last of O’Dell’s chips went in after a Qc Js 8h flop. O’Dell showed Ad Qd 6s 6c 5d, while Harkin offered Ah As 8s 7s 6d. Harkin made two pair on the 7c turn, and the Ks river improved neither hand, giving Harkin the knockout and the win.

Harkin, calm and quiet at the table, opened up quite a bit in a post-win chat with the WSOP. Harkin, who’s been playing poker “mostly full time” since 2004, came to the final table with the lead and threatened to make a rout of it, but his foes had other ideas. “I was trying to play good poker, stay relaxed, make good decisions, and not get frustrated. I was trying to have fun.”