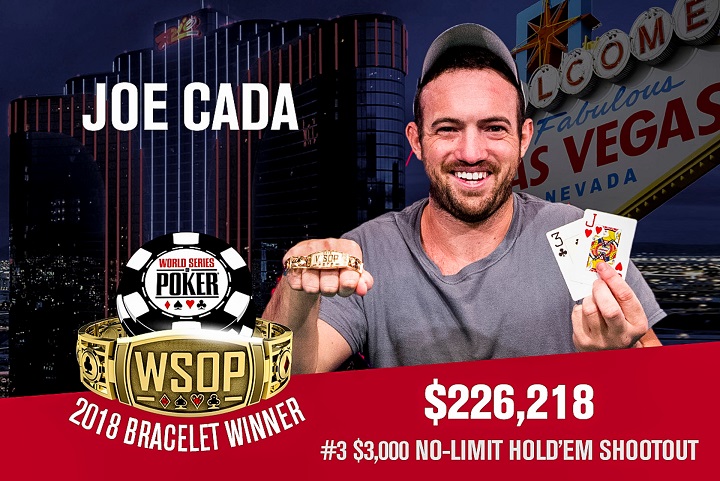 It was a battle to make any poker reporter salivate. Two former WSOP Main Event champions, Joe McKeehan and Joe Cada, heading for a clash where only one of them would win the gold. While McKeehan got eliminated in 3rd place, it was Joe Cada who went onto claim his 3rd World Series of Poker gold bracelet winning Event #3: $3,000 NLHE Shootout for $226,218. Before this, Cada won the 2009 WSOP Main Event and a few years later in 2014, he won a different $10,000 buy-in tournament for his second bracelet. In those post win interviews, Cada dedicated his cracelets to his biggest support system, one each for his Mom and Dad. But this third one he would probably like to keep for himself.

363 entries took part in this $3,000 this year, narrowly missing out on breaking last year’s numbers. The final table has some serious star power as besides Joe McKeehen, there was also Sam Phillips, Anthony Reategui, Ihar Soika, Harry Lodge, and Joshua Turner. Speaking after the win, Cada, a Michigan resident, had this to say, “I’m feeling great, it’s tough to win any No-Limit tournament. It means a lot to win my third bracelet. I have loved the WSOP ever since being a kid, I watched it all the time on TV. Winning these bracelets, it’s unreal. You’ve got to just run good and I’m lucky to run better than everyone else. I like shootouts because you have to adjust constantly.”

Cada who beat Sam Phillips in heads-up play crippled his opponent in the 195th hand of the final table. Phillips shoved with his ace-four and Cada called with pocket sixes. The board did not help Phillips and on the very next hand, Cada finished things off, turning his pre-flop Jack-Three into a full house for the championship. Earlier, in three-handed action, Cada eliminated a fellow member of the Main Event champion club, Joe McKeehan, to take a huge chip lead into headsup action with Phillips.

It was a glorious end to a long and often-frustrating day for Cada, who said he wasn’t getting good cards early. But eventually, fortunes shifted his way — including a rivered straight that earned him a critical double-up at the final table. “I didn’t really get many hands early, so I used my image on a few hands; I three-bet some marginal hands, like 9-8 suited,” Cada said. “At the beginning, I was pretty card-dead for a while.” With this bracelet win, Joe Cada has now surpassed $10 million in career WSOP earnings.

In other WSOP action on Saturday, Michigan’s other recent Main Event champion, Ryan Riess, made a strong run in the $100,000 buy-in high-roller tournament, but finished just outside the cash cut. Riess, the 2013 Main Event champion, was eliminated in 18th place; the top 16 got paid.

We are bringing you updates every single day from the world’s biggest poker spectacle so stay tuned to GutshotMagazine.com for all the updates from the World Series of Poker 2018 in Las Vegas