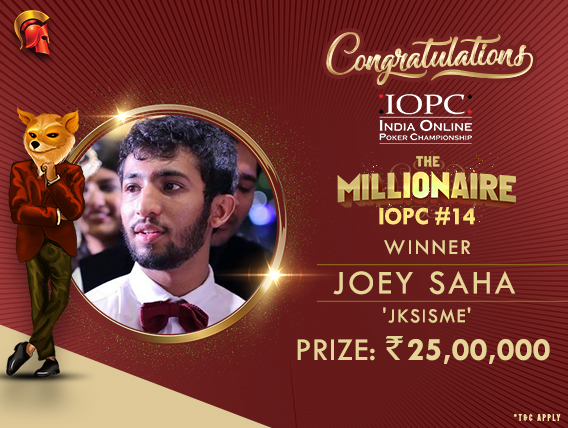 Yesterday was a huge day for India’s online poker community as The Spartan Poker, one of the most reputed companies in this business, hosted The Millionaire INR 1 Crore GTD under the popular India Online Poker Championship (IOPC) series, having a total guarantee of INR 8.5+ Crores in cash prizes.

The Millionaire is one of the gems of all the tournaments hosted by all Indian websites and is marked on every poker enthusiast’s calendar. Last night’s Millionaire attracted a colossal field of 1,754 entries (including 349 re-entries and 633 re-buys), upping last month’s Millionaire turnout. With such a staggering reputation of this tournament, the field attracted a lot of pros and regulars from across the country and was a highly competitive affair.

The tournament began yesterday on Spartan at 5.30pm and was in the books by 4.18am today morning. The winner to emerge from the long haul of almost 9 hours was Jai ‘Joey’ Saha aka ‘jksisme’. He bagged the prestigious Millionaire title and a huge pay-check of INR 25,00,000 as the 1st place cash prize, making a clean win without any deals.

The runner-up ‘Donkey 07’ also earned an enormous amount of INR 14,70,000 as well. A huge field like this is a regular thing with Spartan’s feature tournaments, and this being the Millionaire, the hype was already building up and it climaxed into a high return day yesterday.

The champion, Saha, is an online player and has a few big cashes from previous tournaments. He won PokerStars India’s Diwali Rush Main Event in 2018 for over INR 6.2 Lakhs. With shipping such a huge event like the MIllionaire relatively early in his career means a lot of eyes will be fixed on him and who knows he might ship a few more upcoming IOPC events or finish at the top of the IOPC Leaderboard too. This life-changing winner prize will surely be a great addition to the young player’s bankroll and will enable him to play in more high-stakes events in the coming future.

The final hand of the Millionaire saw Saha with over 2:1 chip lead. The eventual champion re-raised and went all-in before the flop of 8h Ks 3d was revealed. The turn and river of 2d and 9s respectively didn’t prove of any help to his opponent, who had Ah 7h. Saha made an Eight-pair with his 8d 7d and subsequently shipped the second biggest event in this edition’s IOPC.

We got in touch with Saha after the enormous win and he had this to say about it, “The experience was great. This is my biggest score till date. I was in for I think 8 or 9 rebuys so was really happy to at least break even. Running deep in these massive events is always a sick experience and these are the moments we play this game for. This is a great start to 2019 and hopefully just the start of things to come.”

Out of the prize pool, top 145 places were paid for a minimum cash prize of INR 15K. The Millionaire never fails to attract the bests in the circuit and that’s what happened yesterday too.  Finishing 9th was budding player in the scene Nadeem Basha aka ‘pokerbill’ for INR 1,25,000. Other regs to finish in the money included Kavish Kukreja aka ‘Dietchips’ (28th – INR 40K), Pranav Khandalkar aka ‘pranavpoker’ (42nd – INR 30K), IOPC #8 winner ‘Iamachampion’ (44th – INR 30K), Kartik Ved aka ‘TheInternetKid’ (50th – 30K).

This edition’s IOPC has the Main Event with a monumental INR 1.5 Crores GTD and is expected to send shockwaves through the community. Keep reading GutshotMagazine.com for timely IOPC results and updates as well as other poker news from around the world.