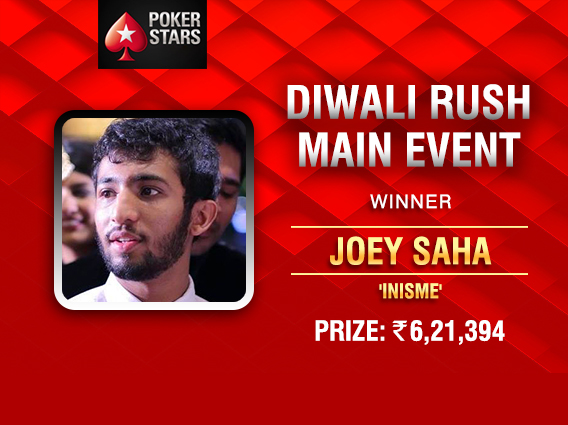 The Indian version of the PokerStars website launched in April this year and even though there were a lot of expectations, they were on the quieter side for so many months. However, the company mentioned that they would begin full swing marketing activities towards the end of the year and the Diwali Rush series was a nice way to begin.

They launched the series which was their first ever tournament series, and it had around INR 1.5 crore in guaranteed prizes waiting to be won. The series was played between 28 October and 5 November 2018, with the Main Event scheduled for the last day and another surprising freeroll tournament that was giving away PSPC Platinum Pass ($30,000).

The Diwali Rush Main Event INR 30 lakh GTD took place a couple of nights back and 501 entries registered to the INR 7,700 buy-in NLHE tournament, which included 327 entries and 174 re-entries. At the end of the night, the player to come out on top of this strong field was Mumbai’s Joey Saha, who plays on PokerStars as ‘inisme’.

The Main Event of this first ever series on PokerStars turned out to be a massive success and the guarantee was smashed with the prize pool being taken up to INR 35.07 lakh. This was then shared among the top 87 finishers, but none would’ve been happier this Diwali than Saha, who walked away with a whopping first-place prize of INR 6,21,394.