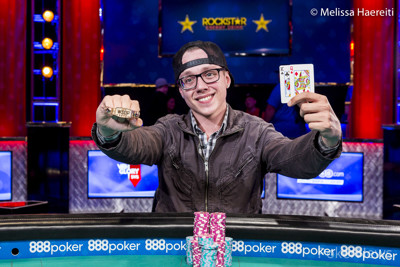 A massive 566 entries registered to the first bracelet event of the 2018 World Series of Poker, which was restricted to casino employees only. Event #1: $565 Casino Employees Event generated a prize pool of $283,000 and at the close of Day 1, only 13 survivors remained.

Jodie Sanders, a table games dealer at the Pechanga Resort and Casino, California, was heading the chip counts entering into Day 2 and he, along with Jordan Hufty, dominated the other players right through the second day of play, so it was fitting that these two players reached heads up.

A long battle of nearly four hours took place between the two and finally, it was Hufty who emerged victorious and took home the title and the top prize of $61,909. While it was the first event of the 2018 WSOP, he wasn’t the first to win a bracelet as Elio Fox won the single day $10,000 Super Turbo Bounty Event yesterday.

Hufty, an Aria poker dealer and floorman, has only cashed out in two poker tournaments in the past and not only was this his first live poker victory, but it was also his largest cash by a long, long way. “I’ve thought about this every day for the last 15 years and for it to actually happen is just unbelievable,” he said after the win. “I felt confident and I knew I just needed to avoid making mistakes and capitalize on my opponent’s mistakes. When you are 70 big blinds deep heads-up, it can be a grind, but I never lost focus.”

In the final hand, Sanders went all in with pocket threes and after thinking a while, Hufty made the call with K-Q. 10-9-2 on the flop meant Sanders had the lead, while 7 on the turn also kept him ahead. However, a King opened on the river and Hufty was crowned champion of the first event of the 2018 World Series.

Keep reading GutshotMagazine.com for daily updates on the 2018 World Series of Poker.