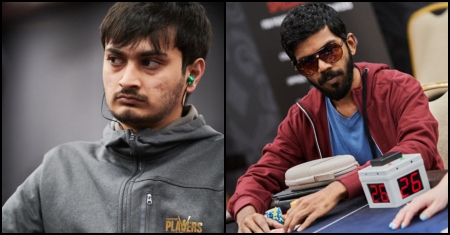 RUB 371,000 EPT High Roller became one of the latest tournaments to kick off in the ongoing European Poker Tour (EPT) series at Casino Sochi, Russia. The buy-in itself is a massive one of RUB 371k (~INR 3.95 Lakh) so you know that only the best in the business would be willing to register here.

For Team India, there were a few who decided to join this tournament including Aditya Sushant and Kartik Ved, and these two are among the best in India, regardless of whether we’re talking about live poker or online poker. They were among the 78 entries that registered on Day 1 of the HighRoller and also among the 33 players who survived the day.

10 Levels of play concluded before the players bagged their chips to return on Day 2, with late registration still on until 2pm local time today. Ved and Sushant both managed to get themselves a bag and the former is also among the top 10 chip stacks, with 139,000 chips. Sushant on the other hand is slightly below the average chip stack, with a stack of 56,500.

Both players will be looking to chip up during Day 2, and get closer to the current chip leader, the local boy Sergey Kolyasnikov. He has slightly above $8k in live cashed and could very well beat that in this HighRoller tournament, having taken the chip lead with an elimination on the last hand of Day 1. PSPC winner and PokerStars Team Pro Ramon Colillas is also in the mix, currently 6th in chip counts.

For more updates on the EPT Sochi HR and how well our Indian players fare in this competition, keep following GutshotMagazine.com.