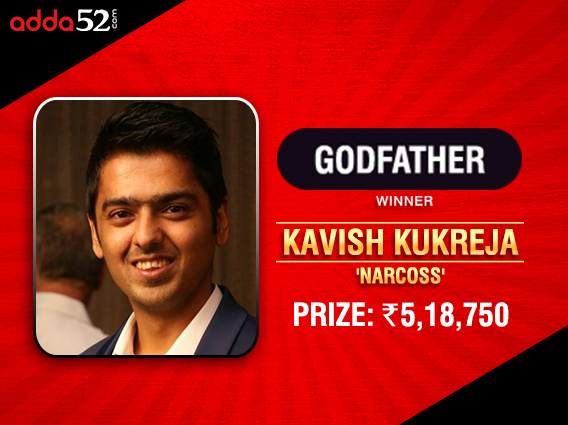 The Godfather tournament series on Adda52 is easily one of the most popular series in the Indian online poker space. However, it also witnesses some of the toughest fields in the country every Thursday night, making it extremely difficult to come out victorious in this tournament.

Last night was another edition of the ongoing Godfather 6.0 series on Adda52, kicking off at 8pm. The tournament has an INR 5,500 buy-in and yesterday, the guarantee was broken with a total field of 226 entries registering and the prize pool being taken up to INR 20,75,000.

The competition is always intense in Godfather, where the winner doesn’t just take away massive tournament winnings, but also a chance to fly to Australia and be a part of the 2019 Aussie Millions. INR 77,777 is deducted from the winner’s prize money, as a seat to the Godfather Finale SnG, where all winners will compete for the INR 7 lakh package trip to Aussie Millions early next year.

Last night, it was popular pro Kavish Kukreja aka ‘narcoss’ who took down this tough field, winning INR 5,18,750 for his efforts and becoming the 4th entrant into the Godfather 6.0 Aussie Finale SnG. So far, players like Mihir Thakkar, Suresh Kolli and Happy Goyal have booked themselves seats into this SnG.

As usual, there were plenty of known names in the field and many of them finished in the money as well, with the top 45 players being paid out a minimum cash prize of INR 7,263. Some of the Adda52 regulars who finished in the money included Aditya Sushant (32nd), Arsh Grover (30th), Arjanveer Chadha (25th), Sumit Sapra (20th), Tarun Goyal (19th), Sahil Mahboobani (16th), Pranav Khandalkar (14th), Nishant Sharma (13th), and others.

Eventually, Kukreja beat ‘Victor562’ in heads-up, who collected INR 3,21,625 for finishing in second place. It put to end a very long grind which lasted over 8 hours as the tournament finally got done at 4:17am this morning. Kukreja would be proud of this win, having made another massive addition to his bankroll, while also giving himself the chance to multiply these winnings in Australia.

It was only a couple of weeks back when Kukreja shipped the Adda52 Millions too, outlasting another tough field to emerge victorious. Gutshot caught up with the player after he took down this tournament. He said, “I’m thrilled to win the Godfather. I’ve had many deep runs in this tournament, and really wanted to win it. It’s a great structured tournament by Adda52 and I’ve finally won it.”

GutshotMagazine.com posts timely updates on India’s biggest online and live poker tournaments such as the Godfather, so stay tuned for similar stories.