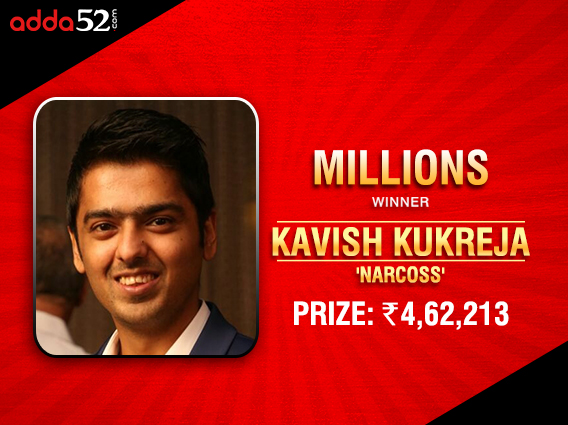 Every Sunday, the Adda52 Millions tournament attracts some of the toughest fields in online poker in India. Part of their Sunday grind line-up, the Millions has proven to be one of their most popular tournaments, with a steep buy-in of INR 11,000, but huge prizes also on offer to those who make it till the end.

Yesterday was yet another edition of the Millions on Adda52 and it kicked off at 8pm, with a total of 212 entries joining by the end of the registration period – 154 players + 58 re-entries. From these, only the eventual top 27 finished in the money, taking away a minimum prize of INR 12,720 each.

Like we said, this Adda52 featured tournament always sees a tough field and yesterday was no exception, with of big names in the mix, including Adda52 Team Pro Kunal Patni aka ‘KunalPatni’ who finished in 22nd place for a min-cash. Another top player who made a deep run was Sumit Sapra aka ‘Hammer_Head’ who eventually busted in 16th for INR 15,900.

As the tournament ran deeper and the stakes were increasing, another few top players like Siddharth Karia aka ‘skaria’ (13th – 21,200), Akshay Nasa aka ‘vibaks’ and Guneet Kwatra aka ‘guntz’ (11th and 10th respectively for INR 26,500) exited from contention. Popular player Goonjan Mall aka ‘gmtesting’ bubbled the 6-Max Final Table, finishing 7th for INR 74,200.

As every week passes, we notice that only some of the best players manage to ship the Adda52 Millions and this latest edition was no different, with Kavish Kukreja aka ‘narcoss’ taking down the title. He has been around the Indian live and online poker circuit for years and this isn’t the first time he has managed such a big win on Adda52.

Gutshot caught up with Kukreja to ask him about last night’s tournament. He said, “It was an amazing experience as always playing the Adda52 Millions. It feels good to win this title for the third time in my life. I didn’t know anyone that well on the FT, but there were some decent players. It was a long grind that went on for a while.”

Yes, the tournament eventually ended at 4:34am this morning with Kukreja agreeing on a deal with ‘Volatile’ in heads-up, as they were pretty evenly matched in chip counts. Kukreja took the top prize of INR 4,62,213 while Volatile collected INR 4,38,787 for finishing second in the tournament.