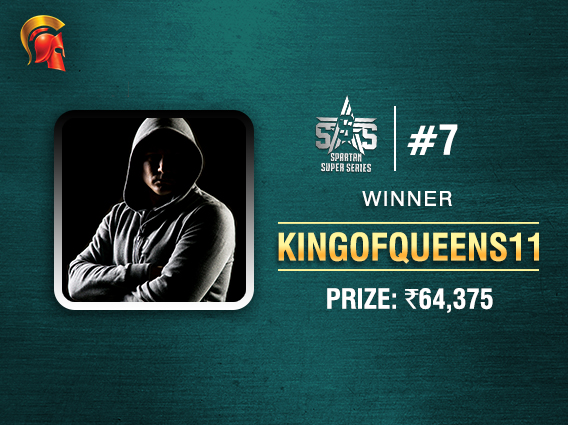 Day 2 of the Spartan Super Series (SSS) was played out yesterday and we had another afternoon launch with SSS Event #7 INR 2.5 Lakh GTD kicking off at 4pm. This was a re-buy add-on tournament and it had a buy-in of INR 550, and an advertised prize pool of INR 2.5 lakh.

This was a pretty affordable buy-in amount and a total field of 404 entries registered to the tournament, with only the top 18 being paid out a minimum cash of INR 4,000. Coming out on top of this field and taking home the biggest pay-check of the tournament was ‘kingofqueens11’, who was rewarded with INR 64,375 for winning SSS Event #7.

Rajat Sharma aka ‘Garammasala’ has been winning quite a few titles on Spartan, but let’s not be mistaken, as here’s another player who has named himself ‘Narammasala’. The player made a deep run but eventually lost to kingsofqueens11 in heads-up of SSS #7, taking away INR 42,625 for the runner-up prize.

With the stakes being relatively lower than most SSS events, this wasn’t a very long tournament, eventually ending in Level #36 with the blinds at 12,500/25,000 – 2,500. kingofqueens11 had nothing but a 1.5:1 chip lead against Narammasala before the final hand of the tournament was played.

This hand saw another pre-flop all-in situation that we see way too often at the ending stages of tournaments, with increasing blind levels building pressure on the players. Here, Narammasala shoved all-in with As Qh and needed to hit a pair of any card to go ahead of his opponent’s pocket Jacks.

Narammasala would’ve been over the moon with the 5h Ac 6c flop and having hit a pair of Aces. However, it was all over for him when Jh opened on the river and kingofqueens11 completed his set of Jacks. Keep reading GutshotMagazine.com for more updates on SSS tournaments.