The Southeast Asian country of Vietnam has become a hotbed for poker since a couple of years. The country sees a lot of high value and popular tournaments being hosted within its borders, and Vietnam being relatively affordable, these tournaments see a wide range of people from different nations participating.

The first major tournament series of 2019 in Vietnam is the Asian Poker Tour (APT) Kickoff Vietnam 2019, scheduled to take place between 9-20 January 2019. The APT brand is a well-known one worldwide and never fails to attract the enthusiastic poker fans from around the world. This is also their first live stop of the year.

The series of 12 days will be hosted at the popular Pro Poker Club in Ho Chi Minh City and will see a total of 20 events lined-up to suit players of all kinds. The first day will begin with Event #1 Monster Stack, which has a buy-in of VND 11 million (~INR 33,300).

After the Main Event declares its champion on 15th January, the following day will witness another event called the Championships Event with a whopping guarantee of VND 6 billion. The buy-in for this will be VND 38.5 million (~INR 1.16 Lakhs), which will declare its champion on the final day of the series.

Another emerging popular poker game Short Deck will also feature in the series. Event #9 Short Deck (Shot Clock) will run between 14-15 January at a buy-in of VND 9.9 million. Short Deck has become quite popular in recent times, with the likes of Phil Ivey promoting the variant, winning his first ever live Short Deck title in 2018. 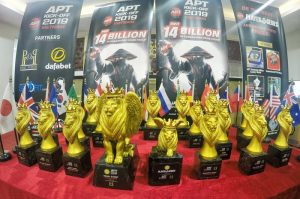 Some of the well-known Indian players who have flown to Vietnam for the Kickoff include Abhinav Iyer, Adda52 Team Pro Kunal Patni, Madhav Gupta, recent Millionaire winner Vinod Megalmani, Dhaval Mudgal who brought home the WPT Vietnam ME title in October 2018, Eka Vedantham, Guneet Kwatra and others.

Gutshot caught up with some of these players to get their views on the series before it began. Kunal Patni commented, “It’s my first series of the year and I always like coming for APT cause they have the best structures around. Last year same time I had my biggest ever score in WPT Berlin and I am really hoping that I can start the year in a similar fashion this year.”

Dhaval Mudgal also spoke to us about the series, clearly hoping to be successful in Vietnam once again. He said, “I have a special place in my heart for Vietnam amd I’m motivated to do well again. I’ve been putting in some online volume as well as a lot of study, so hopefully that bears fruit.”

Eka Vedantham is another player who has been crushing tournaments in online and live poker in India, so he wisely decided to make his first poker trip out of the country. He said, “I’m looking forward to a great first international series and I expect myself to live up to the hype.”

Last year’s APT Kickoff Vietnam ME winner Adrian Esslen won a pay-check of VND 1,313,920,000 (~INR 39 Lakhs) out of the VND 9.6 billion prize pool and beating a 664-strong entry field to bag his title. For a complete schedule of the series, click here.

With the recent decision by the Vietnamese government to allow its citizens to gamble in local casinos, Vietnam’s gaming industry should see a gradual rise in revenue from the tourism sector. We’re excited for the first APT stop of the year and we’re hoping our Indian players bring back some titles.

Keep reading GutshotMagazine.com for timely coverage of the APT Kickoff Vietnam 2019 and for general poker news from around the world.