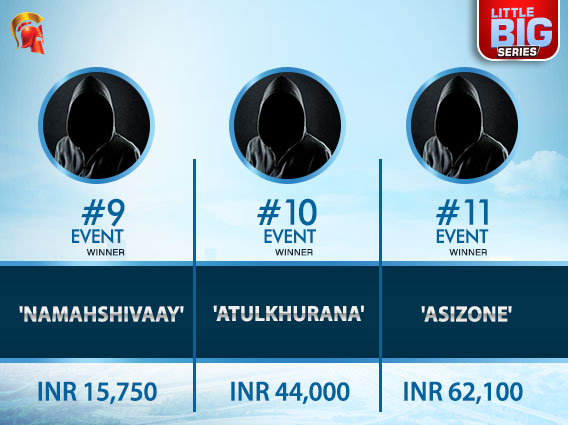 All poker players look forward to the weekend with much enthusiasm and gusto because not only are there plenty of value filled tournaments across Indian poker sites but it’s also great warm up for the Sunday grind where even more attractive prizepools are up for grabs. And speaking of value, The Spartan Poker is currently hosting its Little Big Series (LBS) of tournaments which is a favourite especially among those players who enjoy good value for low and intermediate level buy-ins. This edition of the LBS in fact has Spartan offering over double the guarantee in the previous edition suitably justifying its ‘Special Edition’ moniker to the series name.

We had four tournaments which took place over the course of this Saturday. Here’s a round-up of the first three tournaments and we’ll bring you an update of the LBS Warm Up event in a short while from now:-

221 entries gathered up for this first tournament of the day which had a buy-in of INR 330. He fell short in yesterday’s tournament but this time around ‘NamahShivaay’ went the distance to score his first title in this edition of the LBS. After eliminating ‘acepoker7325’ in 4th place (INR 7,500), he went on to knockout his heads-up opponent ‘slr111’ when he rivered a straight against his opponent’s pocket Jacks. Top prize for the winner was INR 15,750 while runner-up took home INR 11,025.

The guarantee amounts took a quick jump in the next scheduled event where the buy-in was INR 880 and it saw a participation of 206 entries. A little over fours later, ‘atulkhurana’ got down to playing ‘FunkeyFox’ for the title. atulkhurana overcame a slight chip deficit over the course of a long heads-up battle to take down the title when in a pre-flop all-in he hit two pairs to eliminate his final opponent in the tournament winning INR 44,000 for first place. FunkeyFox made a good score of INR 29,800 for second.

The first of the evening tournaments saw 163 entries taking part in this INR 1,500 buy-in tourney. 24 players cashed out but the top two finishers who took home the most of that prizepool were ‘asizone’ and ‘TheShowdown’ who then battled it out in headsup for the biggest slice of the prizepool. asizone’s elimination of ‘Klopp’ in 3rd place gave him a good lead over TheShowdown and he rode that lead to the finish line turning a set of Aces against TheShowdown’s two pair. INR 62,100 going the way of asizone for the win and INR 41,715 to TheShowdown for his runner-up finish.

Stay tuned to GutshotMagazine.com as we bring you the round-up from the featured event of the Day 3 i.e. the Warm Up in a little while from now.