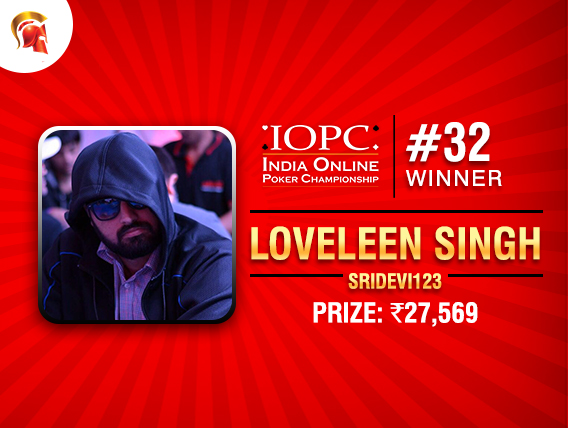 The cash-rich India Online Poker Championship (IOPC) is currently underway at The Spartan Poker, where over INR 7 crore is up for grabs in tournament prizes between 13-22 July 2018. Also, INR 30 lakh is waiting to be won by the top 10 finishers on the IOPC Leaderboard, including a brand-new Jeep Compass.

There are several Indian poker pros who have their eyes fixed on topping the IOPC Leaderboard and the best way to do that is winning titles. A few days back, Loveleen Singh aka ‘sridevi123’ shipped IOPC Event #17 and now, he is in the news again, winning yesterday’s IOPC Event #32 INR 1.25 Lac GTD (550 FO).

The freezeout tournament started at 2pm IST and it attracted 275 entries which took the prize pool up to INR 1.37 lakh and this was shared among the top 39 players with a minimum cash prize of INR 949. Singh took home the biggest prize from these top players – INR 27,569.

Singh beat ‘pokerbill’ in heads-up, who was awarded INR 18,329 for second place. Remember, pokerbill shipped The Elite on The Spartan Poker a couple of months back, for INR 3.25 lakh. Similarly, Singh has also won a Harley Davidson from Spartan in the past. However, neither player has managed to find a place on the IOPC Leaderboard as yet.

However, Singh told Gutshot that he is planning to grind through the whole series and it’ll be interesting to see whether he does make it to the top ten. In this particular tournament, he created a huge lead over pokerbill and ended the tournament by Level #42, with the blinds at 16,000/32,000 – 4,000. In the final hand of the tournament, Singh’s pair of deuces was superior to his opponent’s Ace-high card.