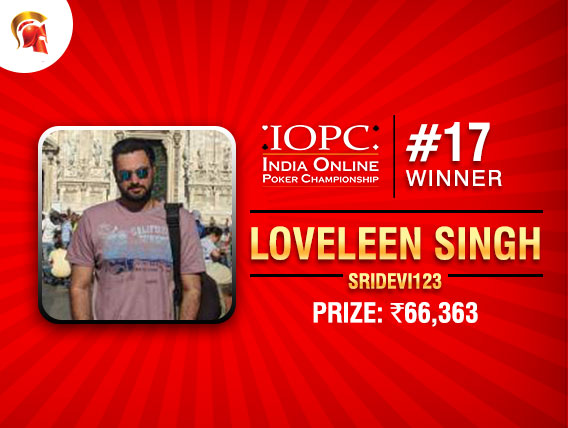 Yesterday was Day 4 of this edition of the prestigious India Online Poker Championship (IOPC) – India’s biggest online poker tournament series hosted by The Spartan Poker. A total of 55 tournaments are scheduled between 13-22 July and five of those were played yesterday.

IOPC Event #17 INR 2 Lac GTD (550 RE) was the first tournament of the day and it started at 2pm IST. A total of 680 entries registered to the tournament which nearly doubled the guarantee, taking the prize pool up to INR 3.4 lakh and the top 47 players were paid out in this tournament, with a minimum cash prize of INR 1,941.

Singh held 9-J while Weedman1 held 8-J in what became the final hand. The board opened 3-10-6-8 and Singh went all-in on the turn, needing a Q or 7 to complete the straight draw. Weedman1 was leading with an 8-pair on the turn and made the call, but a Q on the river completed Singh’s straight, beating Weedman1’s pair of Eights, winning the pot and the IOPC Event #17 title as well. Weedman1 took home a prize of INR 42,154 for second place.

Gutshot caught up with Loveleen Singh after this win. “After the SSS last year, I haven’t been playing MTTs much. This Sunday I got to know about IOPC and decided to give it a go. I ran pretty good and shipped this Event #17. Now, I am planning to grind the whole series…”

They gained vital points to the IOPC Leaderboard but none of them made it to the top 10 as yet, being their first finishes in the top two. However, there are plenty of tournaments to be played and they could still make it to the Leaderboard top 10, where INR 30+ lakh is up for grabs in guaranteed prizes. Remember, Loveleen Singh has also won a Harley Davidson from The Spartan Poker in the past.

Keep reading GutshotMagazine.com for similar updates on IOPC tournaments on The Spartan Poker.