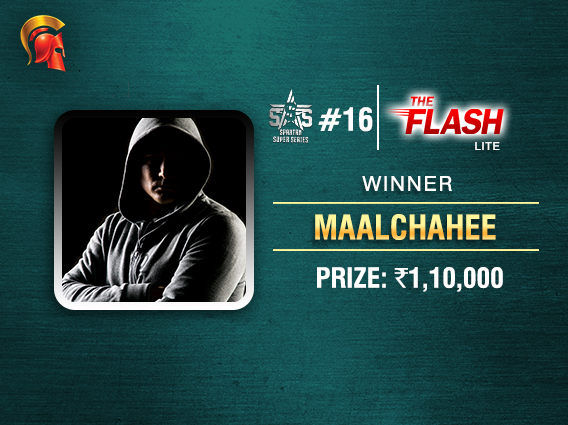 It was Level #40 of the tournament when the winner was finally declared, with the blinds running at 6,300/12,600 – 1,260. Here, ‘MaalChaHee’, who played on the FTRPoker platform, had chipped up to more than double of the amount of chips that his heads-up opponent ‘cvc’ had.

MaalChaHee was dealt 4c Qs and he decided to make a small bet on the 5c 4s 3h flop where he hit a pair of Fours. He checked on the Qh turn card where he completed two pairs. However, cvc raised 110k and MaalChaHee called. On the Kc river card, cvc completed a pair of Kings (as revealed later) so he moved all-in. MaalChaHee was happy to make the call with Queens and Fours, and he took down the pot as well as the title.

MaalChaHee won a 6-figure score of INR 1,10,000 for this effort, while his opponent cvc took away INR 74,500 for finishing second. Keep reading GutshotMagazine.com for more updates on the top Indian poker tournaments and for daily updates on the Spartan Super Series.