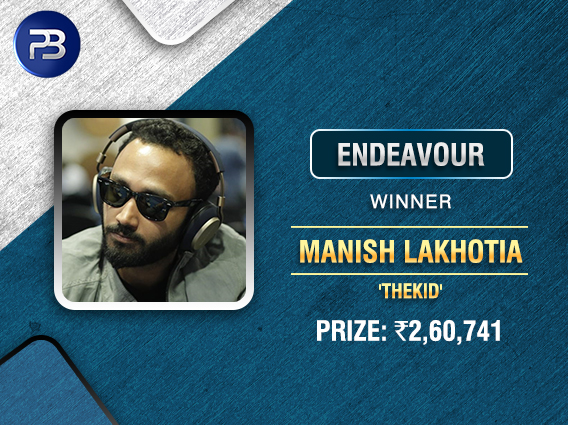 Standing tall at the end of tournament and clearing the huge field was Manish Lakhotia aka ‘thekid’ who was heads-up on the final table with Harsh Goswami aka ‘shiv22’. The tournament kicked off at 8 pm last night and the final hand was played at 2:50 am this morning when the tournament finally ended just 10 minutes short of the 7-hour mark. Manish took home the top prize of INR 2,60,741 while Harsh also won a decent sum of 1,93,016. The top 39 places were paid a minimum sum of INR 10,158.

This was not Manish’s first major online win as he has bagged a couple of tournaments on other platforms as well. He won The Elite on Spartan in May this year and also shipped The Electra in the same month. He shipped The Whale on Adda52 last week too. With a best live cash of around $38,673 and total earnings of $42,733, Lakhotia is also in the top 100 of India’s All Time Money List.

Gutshot caught up with Lakhotia to say a few words about his win. He said, “To ship anything on PokerBaazi is simply great. I don’t play much on Baazi. Endeavour is a lovely and famous tournament. This month has been going good so far. I shipped Adda52 Whale last Friday, now this. Happy with the performance.”

The Endeavour has been one of the high value tournaments on PokerBaazi and has been grabbing a lot of attention from players as the guarantee has always been surpassed because of the number of entries the tournament sees. Keep reading GutshotMagazine.com for more updates on India’s biggest and best online poker tournaments.