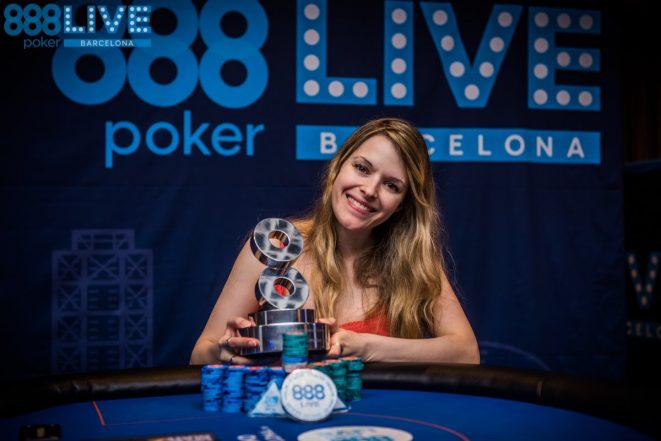 It’s been a fantastic last one year in live poker for Argentine female poker pro Maria Constanza Lampropulos. She has cashed out in tournaments all over the world of late and is slowly becoming one of the best female poker players in the circuit. Nearly $3 million in live poker winnings was clearly not enough for her. She wanted more…

While most poker pros have been a part of the action at the 2018 World Series of Poker that began a couple of days back, Maria Lampropulos decided to participate in the 888poker LIVE Barcelona tournament series, where she has now shipped the High Roller event, after overcoming a 2-1 chip disadvantage in heads up.

Big wins are nothing new for the Argentine pro, having won her career best $1,255,004 for shipping a partypoker MILLIONS Nottingham event in April 2017, and also starting this year well by winning a PCA event in January, for another 7-figure score of $1,081,100.

She bagged €63,460 (~$ 74,055) and a package to the WSOP Crazy Eights event for her efforts in Barcelona, adding another tournament title to her poker achievements so far. The event took place between 30-31 May 2018 at Casino Barcelona and a few days are still left of the series, with Day 1a of the Main Event currently being played out.

Her K-6 turned out to be superior to her opponent’s pocket queens in the final hand, which gave her the title. Lampropulos spoke about her plans of heading to Las Vegas to play in the WSOP, and playing in ‘ALL’ the tournaments there, when interviewed by PokerNews after this win. Check out the full interview here:

Keep watching GutshotMagazine.com for a report on the 888poker LIVE Barcelona Main Event, as well as continuous reports on the action taking place in Las Vegas at the 2018 WSOP.