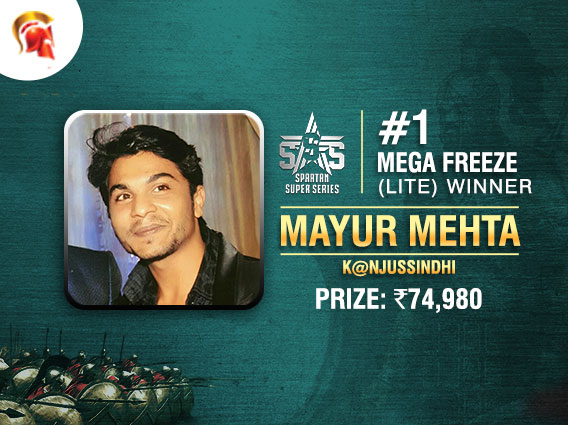 Just as the excitement from the recently concluded India Online Poker Championship (IOPC) was fading away, The Spartan Poker decided to go ahead and launch another big tournament series for their loyal online poker players. The Spartan Super Series was brought back, scheduled between 13-19 August 2018 and an overwhelming amount of INR 3.7+ crore to be given away in guaranteed prizes.

So, 37 tournaments have been scheduled during this 7-day series and yesterday was the first day, with 5 tournaments being played and several players walking away much richer than how they began the day. The August SSS series kicked off with SSS Event #1 Mega Freeze (Lite) INR 3 Lakh GTD.

The tournament began at 2pm IST and came to an end after 6 hours and 11 minutes. The INR 2,200 buy-in saw a participation of 163 entries and the guarantee was beaten, with a new prize pool of INR 3.26 lakh being generated. This meant the top 24 players were paid out a minimum cash prize of INR 3,260.

At the end of the tournament, it was Mayur Mehta aka ‘K@njusSindhi’ who walked away with the Mega Freeze Lite title and the top prize of INR 74,980. It was Level #43 of the tournament when he played the final hand against heads-up opponent ‘Bounceez’, with the blinds running at 8,300/16,600 – 1,660.

There wasn’t much of a difference in the chip stacks of these two players and they went all-in after the river card opened in what became the final hand. The board opened Kc Th 4s Qc 8d and Mehta shoved in the rest of his stack with a King-pair, while Bounceez made the call, revealing a pair of Queens. The latter lost the pot and had to settle for the runners up prize of INR 50,367.

Bounceez may have missed the title in this opening event, but he seemed determined as he finished the day by shipping the INR 5 lakh GTD tournament, taking home over INR 1.5 lakh as the top prize and gaining vital points to the SSS Leaderboard, where INR 10 lakh is waiting to be won in prizes to the top 10 finishers.