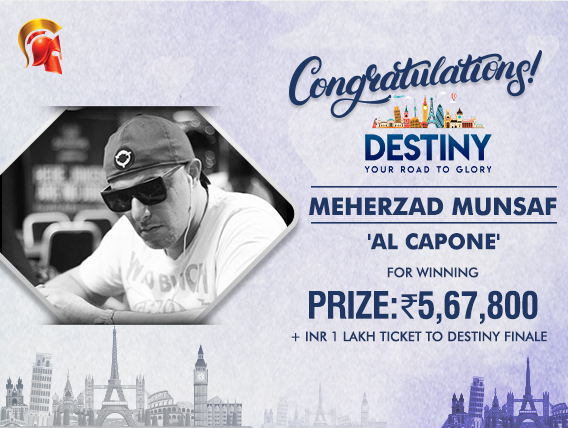 Regular Indian poker players may all be aware of The Spartan Poker’s tournament series called Destiny, where one winner is crowned each week and after 10 weeks, 10 players sit down in a Destiny SnG Finale, to battle it out for the mega INR 10 lakh package trip to play poker in Europe!

Currently, Destiny 6.0 is underway and the tournament which takes place every Wednesday is one of Spartan’s most popular tournaments. Last night was no different as the INR 5,500 buy-in event saw a participation of 504 entries, which easily beat the INR 20 lakh guarantee, creating a new prize pool of INR 25.2 lakh.

Everyone would’ve had their eyes on the top prize, taking away big money and also the chance to fly to Europe. However, only one could be the winner and that winner was popular player Meherzad Munsaf aka ‘al capone’, who beat everyone else in this tournament to take away the top prize of INR 6,67,800, from which INR 1 lakh will be deducted as a seat into the Destiny 6.0 SnG Finale.

Destiny always attracts some of the best poker players in the country and yesterday was no different, with the top 40 players being paid out a minimum cash of INR 15,120. Finishing in second place was ‘helkul’, who took away a pretty handsome prize of INR 4,15,800 himself.

Incidentally, helkul was also the winner of last week’s Destiny tournament, already having booked his spot in the Finale. The player would’ve started with double the chip stack in the finale had he won it again, which would’ve been quite an advantage. He also won the Triple Bubble tournament a few days back, seeming to be on quite a roll.

However, last night, he wasn’t able to get past Munsaf, who won the tournament in Level #54, when the blinds were running at 22,500/45,000 – 4,500. Before the final hand, the two players nearly had identical chip stacks, and holding pocket Deuces, Munsaf went all-in after the flop opened 2c Ah Jh and he hit a set of twos. The next two cards opened 9d 3s and helkul hit two pairs – Aces and Nines – but it wasn’t enough to beat Munsaf’s three of a kind.

Munsaf recently also won a massive prize of INR 19.16 lakh for finishing second in the DPT Colossus 200k Super High Roller in Goa. Gutshot caught up with the winner after this tournament. He said, “It is not in the stars to hold our Destiny, but in ourselves. It feels awesome to win this tournament… Play safe, play responsible and do not feed your fears.”