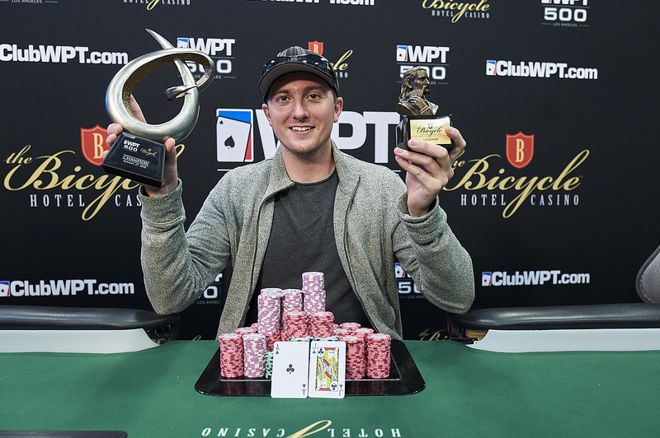 You may be surprised to hear this, but the recent WPT500 Legends of Poker stop in Los Angeles had 16 – yes 16 – starting flights. The event had a total field of 2,509 entries during these starting flights, plus a couple of other official days before a winner was declared.

The $570 buy-in tournament saw a US-dominated field at the Bicycle Casino and after more than a week of play, the tournament finally came to an end. Coming out on top of the field and going down in the WPT500 Season V record books was California’s Michael Copeland.

The player took home a career-best prize of $181,950, with barely any prior live cashes before this tournament. He was very dominant in the tournament, scoring three eliminations and getting the lead late in Day 2. He maintained it till the end of the tournament, beating countryman Jorge Pineda in heads-up.

This would’ve been a huge turning point for the player, who had around $5k in live cashes prior to this tournament, scoring his first live cash over a decade ago. The win may now lead to Copeland considering playing more often and maybe winning bigger titles in the future.

Other top pros who cashed out but didn’t make it to the final table were Martin Zamani, Phil Laak, Thomas Zanot, Adrian Moreno and others, while Indian origin player Sanjay Mayekar finished in 7th place. This tournament concluded the current season of WPT500, while the Main Tour still has a couple of stops scheduled and the WPTDeepStacks has five events schedule for next month.

Keep reading GutshotMagazine.com for regular updates of WPT tournaments and other top tournaments from around the world.