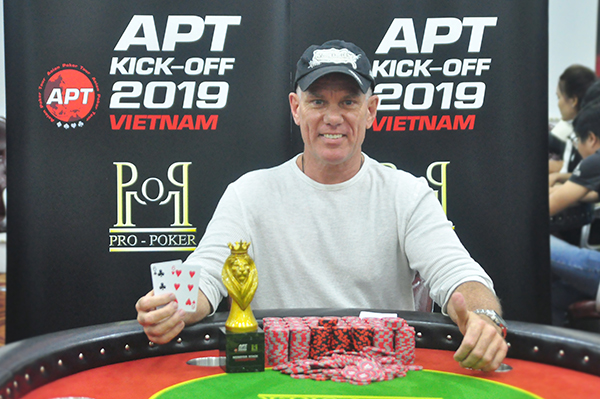 The Asian Poker Tour (APT) is currently hosting the 2019 APT Vietnam Kickoff series in the well-known Pro Poker Club in Ho Chi Minh City. The series began on 9th January and will run till 20th January. The series began with 2 events on its first day.

The first event of the series, Event #1 Monster Stack 1, is now in the books with its champion being declared yesterday. The tournament had a buy-in of VND 11 million (~INR 33,757) and attracted a total of 174 entries (including 33 re-entries). Out of the 54 who progressed to play in Day 2, local pro Tran Kim Dong was leading in chip counts with a stack of 390,000 entering the day and he ultimately finished 13th for VND 27,731,000.

The champion to emerge in Monster Stack 1 was Denmark pro Michael Kim Falcon. He bagged the top prize of VND 383,346,000 (~INR 11.64 Lakhs), the largest share of the prize pool. Falcon instantly took the top place in the APT Player of the Series race too.

Falcon is a well-known pro in the Asian circuit, and mostly plays in Asia. His previous recorded live cashes came from tournaments in places like Vietnam, Philippines, Macau and Cambodia, with one 2017 WSOP earning of $18,950 for finishing 59th in the Millionaire Maker event. He made his career best live cash of $48,714 at the PokerStars Festival Manila back in August 2017. He even shipped CoinPoker HR event in APT Manila in September last year for $24,269, which was his second-best live score.

The APT Vietnam Kickoff has begun its Main Event and its first flight in already in the books, where six Indians progressed to Day 2. Keep reading GutshotMagazine.com for complete and timely updates of APT Vietnam Kickoff as well as general poker news from across the planet.