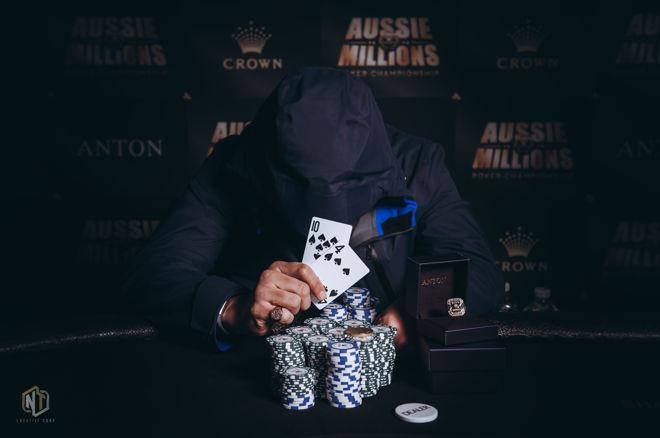 The Aussie Millions Main Event concluded yesterday with Toby Lewis securing the title and a handsome seven figure prize amount. Today, we bring to you a story from the final day of the 2018 Aussie Millions and it is one of the $100,000 Challenge, won by Malaysia’s Michael Lim.

This year’s $100,000 Challenge at the Crown Casino, Melbourne saw 19 entries, beating last year’s field by 1 entry. Poker player Michael Lim came into the day with a comfortable stack of around 45 Big Blinds and he dominated the field, winning the top prize for AUD 931,000 (~INR 4.7 crore) and the coveted ANTON Jewellery championship ring.

Quite a mysterious personality is Lim as you can see in the winner’s pose below as well, and a little bit of mysteriousness is just what’s needed in a game like poker. On his way to the title, quite a few famous poker players from around the world were eliminated, including Fedor Holz and Mustapha Kanit.

Lim went into heads up with Germany’s Manig Loeser, with the latter holding the lead going into this stage. However, Lim doubled up twice just when he looked like he was heading out, to turn the tables and start dominating play. FInally, Lim’s flush on the turn proved better than his opponent’s two pair, sending Loeser packing for the second prize of AUD 558,600 (~INR 2.8 crore). This 2nd place prize took his live tournament winnings past the $6 million mark.

Another German pro Jan-Eric Schwippert had a good run in the 2018 Aussie Millions, finishing as runner up in the $25k and $50k Challenges, but he was eliminated in the $100k Challenge at sixth place, by Christian Christner. Final results:

This is all we can report from the 2018 Aussie Millions, which is now concluded, having recorded its highest ever entries into the Main Event. However, keep reading GutshotMagazine.com for reports on similar big poker tournaments from around the world.