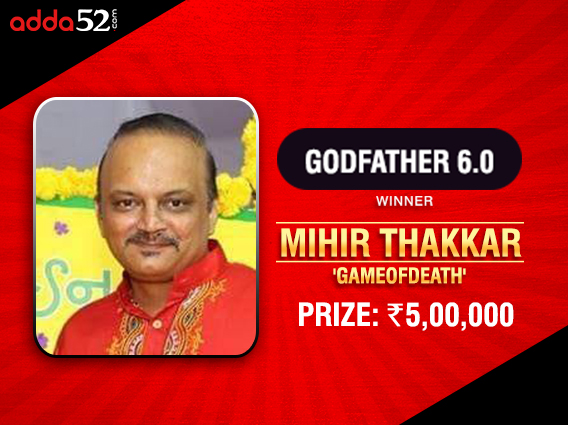 One of the most exciting things that a tournament poker player looks forward to is competing on a big stage. While online poker has allowed that to happen at the click of a button no matter where you may be, the ultimate challenge continues to be a live poker tournament especially one which has a sizeable field. One of India’s top online poker sites Adda52.com offers players exactly this chance every week in its tournament titled the Godfather and this week it was Mihir Thakkar a.k.a. ‘gameofdeath’ who came out on top becoming the first weekly winner of Godfather 6.0 edition.

The Godfather tournament allows players to participate on Thursday evening every week to not only win good amount of cash prizes, but the tournament winner also gets a ticket into a Finale SnG which takes place 10 weeks later. This winner-takes-all format has a monster prize waiting at the end of it i.e. an all-expenses paid trip to an international poker series. This sixth edition of the Godfather is awarding a package worth INR 7 Lakhs to the Finale winning to Aussie Millions, one of the premier live series of the region which takes place at the Crowne Casino in Melbourne. The Aussie Millions is a favourite with players from across the world and in the past 2-3 years, there has been a growing Indian participation as well. The last edition of the Aussie Millions Main Event was won by Toby Lewis who claimed a top prize of AU$ 1.45 million (~INR 7.63 Crores) for outlasting a field of 800 players, a record in its 21 year history. There is every chance that 2019’s edition will go past that 800 mark too, so a massive payday is on the cards for the players that run deep.

Mihir Thakkar too will be hoping to emulate Lewis should he go on to win the Godfather Finale SnG. Coming back to last night’s tournament, Thakkar defeated ‘magesh18102’ in headsup on his way to claim the Godfather title along with a handsome INR 5 Lakhs for first place. From this prize money a sum of INR 87,500 will be deducted and set aside for his ticket into the Finale SnG which promises that Aussie Millions package which is worth INR 7 Lakhs. A total of 36 players made the money in last night’s tournament and min-cash was INR 9,000. This was Thakkar’s second biggest online win eclipsing the runner-up finish he made during the Big Million 2 at Adda52. “It’s always motivating when you win a tournament whether it’s small or big especially when you win a flagship tournament of Adda52. During this tournament I got to learn many things as many pros and good poker players were part of it. I saw many ups and downs but ultimately got to win it,” said Thakkar who is a Chartered Accountant by profession.

When asked about how he plans to approach the Finale SnG, Thakkar laughingly said, “Yes! Would love to win it. To be calm, and for me patience is a key to success and not to give up at any stage.” The Godfather Finale SnG is likely to take place somewhere in mid-January in the new year and you can be sure to read all about that winner right here at GutshotMagazine.com!