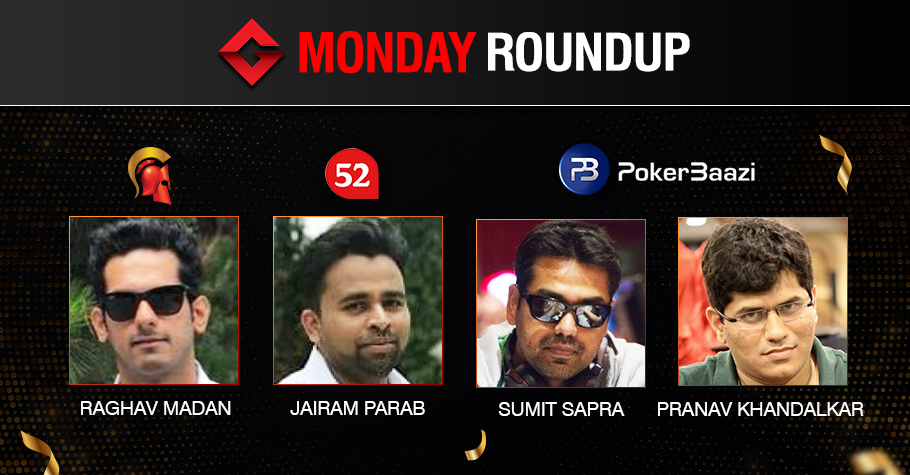 Another busy day across the virtual felts of the country that saw several prominent names claiming titles and winning big. The star performer of the night was Sumit Sapra who after clinching to the Millionaire title on Sunday, took down PokerBaazi’s Monday flagship event. So, keep reading to find out the winners of last night…

Spartan Poker’s Monday night special, ReCharge INR 12 Lakh GTD recorded 579 entries for a buy-in of INR 2,200. At 3:11 am, it was Raghav Madan aka ‘Maddytilt’ who ran past a host of regs and eventually knocked out ‘grovahova’ in heads-up and clinched to the top prize and the latest ReCharge title!

Another attraction on Spartan Poker last night was The Flash INR 6 Lakh GTD which clocked in 614 entries generating a prize pool of INR 6.14 Lakh. Outlasting the competition was ‘LivoJohn’ who defeated ‘denb’ in heads-up and collected the first-place prize money. Settling in the third place was online reg Suraj Rathi aka ‘OmgRATHIII’.

As the Grinders series is underway on PokerBaazi, Event 4 Monday MegaStack INR 3 Lakh GTD logged in 137 entries. The last man standing was Pranav Khandalkar aka ‘pranavpoker’ who eliminated Harsh Bubna aka ‘harsh1327’ in heads-up and shipped the tournament for INR 80,400 in prize money while Bubna banked INR 56,130.

Boasting INR 15 Lakh GTD Adda52’s AOPS Inception drew attention of a pretty good field which led to the creation of INR 17.05 Lakh in prize pool and the top 55 places finished ITM. The tournament declared Jairam Parab aka ‘Keyser_Soze’ as the champion who took home INR 4.09 Lakh in top prize while ‘GigaaBet’ secured the runner-up position for INR 2.38 Lakh.

Riding past the field to ship PokerStars’ Monday marquee event Battle Royale Micro KO INR 10 Lakh GTD was ‘rahulgandhi27’. The event pulled in 344 entries for INR 2,750 and money reached the top 36 places. The winner added INR 1.18 Lakh to his bankroll after defeating ‘J500PC’ in heads-up. The latter banked INR 88,810. It was Sunday Highroller champ Sahil Mahboobani aka ‘inaboobham’ who secured INR 66K for finishing in the 3rd place and Rajat Sharma aka ‘sharabikebabi’ in 5th place for INR 37K.

For more updates on online poker tournament in the country, keep reading GutshotMagazine.com and stay tuned!