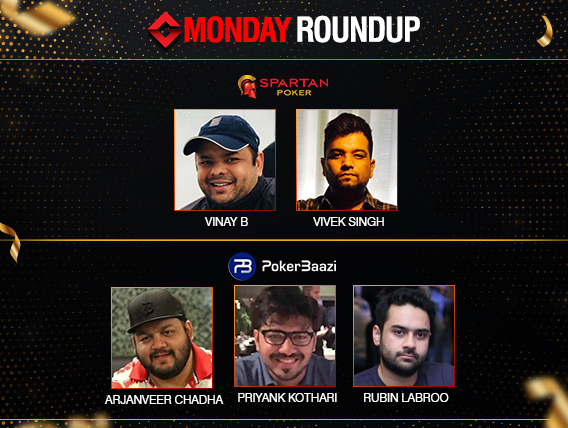 After a smashing Sunday night spreading tons of tournaments across the leading platforms of the country, Monday on Spartan Poker was all about triple features! It was only last week that Spartan introduced double features and truly, the action continues. Another major attraction was PokerBaazi’s PokerBaazi Premier League (PPL). Other platforms too crowned their worthy winners. And here is a summary of Monday majors…

Spartan Poker’s Monday feature ReCharge INR 12 Lakhs GTD attracted 580 entrants after each chipped in INR 2,200 to hunt for the prize money. The final prize pool was divided among the top 55 finishers and coming out on top to grab the largest chunk was Vinay B aka ‘Netflixxed’ after the players settled for a heads-up deal which saw last month’s ReCharge champ Rahul Kumar aka ‘sttoned’ earning the second-place payout for his efforts.

Deep Freeze INR 6 Lakhs GTD is another feature on Spartan Poker which had a buy-in of INR 6,600 last night attracting a total of 100 runners. After 6+ hours of the grinding session, it was Vivek Singh aka ‘KasolHieghts’ who defeated ‘joey114114’ in heads-up to attach another title to his already crowded poker cap.

It was only last week that Spartan Poker introduced double features but the action doesn’t end there. The platform is back with another twist, this time with triple features! Yesterday hosted the first tournament, Dominator INR 6 Lakhs GTD which attracted 206 entrants for INR 2,200. Outlasting the field was well-known circuit grinder Sahil Mahboobani aka ‘ImHighIshove’ who defeated ‘Samaybk’ in heads-up to grab the first-place prize money.

Among the top 27 finishers Sanat Mehrotra aka ‘mehro2511’ (4th), Rony Chowdhury aka ‘bisadip176’ (6th), Neeraj Kumar aka ‘SelfClaimedPros’ (22nd), Guruprasad Gupta aka ‘fish_calling’ (23rd) and others also earned a payout.

The Monday feature on PokerBaazi was The Bout INR 25 Lakhs GTD which kicked off at 8 pm last night. The tournament garnered 515 entries which was enough to cross the advertised guarantee and generate INR 25.75 Lakhs in prize pool which was shared among the top 63 players. Outlasting the field was Day 1B The Endeavour chip leader Arjanveer Chadha aka ‘holdbaby’ who defeated Jayjit Ray aka ‘england’ in heads-up for INR 5 Lakhs in prize money.

Event #24 began at 9:30 pm fetching 401 entrants who joined the tournament after paying INR 4,125 on PokerBaazi. After several hours of grinding, it was Priyank Kothari aka ‘Piko1432’ who conquered the field railing out ‘Harshita1234’ in heads-up. Kothari earned INR 3.15 Lakhs in prize money while his opponent settled in the runner-up position for INR 2.21 Lakhs.

PokerStars’ Monday flagship tourney Monday Hustle INR 5 Lakhs GTD attracted a pretty decent field of 153 entries with each one paying INR 3,300. The top 27 finishers received a share from the final prize pool but the one to grab the largest piece was ‘DarksideOF82’ triumphing the Monday headliner and pocketing INR 1.01 Lakh as winner’s prize money after eliminating Chirag Sodha aka ‘WhyworrY_56’ in heads-up who also earned INR 75,363 for resting in the runner-up position.

Kanchan Sharma ‘thandicoke’ (5th), Harsh Dembla aka ‘kakori kabab’ (11th), Ragesh Mishra aka ‘ragesh91’ (13th), Aditya Agarwal aka ‘Artooriouss’ (14th), Sahil Mahboobani aka ‘inaboobham’ (24th), Ram Kakkar aka ‘TheLagLawyer’ (24h) and so on were among the few notable finishers in the money.

The money reached the top 9 places including Ashish Kumar aka ‘AK19’ (3rd), Aravind Raju aka ‘BenDingBuLLets’ (6th) and so on. For more updates on the top online and live poker tournaments in India and around the world, stay tuned to GutshotMagazine.com.

Sign-up to PokerSaint using code “GUT100”. Also, check out our online poker rooms section, where you can read reviews on the biggest and best poker rooms in the country, while also taking advantage of their bonuses and promotions. Check out these top poker rooms HERE.