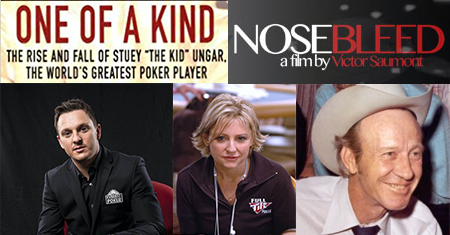 Poker has been one of the biggest sources of entertainment for people around the world for a long time. As much as people enjoy playing it with a group of friends or in a casino, some don’t take their obsession with the game further. On the other hand, there are people who become fans of the game itself, try to learn its ins and outs and want to understand more about the people who excel at it. Many movies have been made and books have been written about poker players. Here we list a few of the best documentaries people can watch to find out more about some of the most successful poker players of all time:-

Nosebleed is revered as one of the best documentaries on poker ever. The movie follows the adventures of two French poker players – Alex Luneau and Sebastian Sabic. The audience is treated to an inside look on the players’ lives as they attempt to win the World Series of Poker in Las Vegas. What’s special about the movies is that it depicts the lives of not one but two players, which allows the filmmakers to show the relationships between them and explore their characters in more depth. In addition, Nosebleed emphasizes the effect playing poker has on the players. The movie will be interesting for those who are more eager to learn about playing techniques as well, as the players reminisce about their past games and talk about their strategies.

One of the few movies to center around a female poker player, the documentary on Jennifer Harman is an eye-opener that not only depicts the history of one of the best female poker players of all time but also outlines the struggles an older generation of poker-players faces with the onset of online gaming.

Amarillo Slim – Anything to Win

Another documentary about a legendary poker player, Amarillo Slim, provides an interesting insight into the lives of poker players. The movie features several interviews with people who were close to Amarillo Slim and is thus able to explore multiple facets of a poker player’s life. The movie is captivating by its interesting depiction of the life of the gambling society in the 1960s.

Sam Trickett is the twelfth highest-earning player in a tournament of all time. He famously won $10 million when he finished second in the Big One for One Drop tournament hosted by the World Series of Poker. Trickett is distinguished by his risky style and the love of high stakes, which the documentary captures well. The movie is fascinating by the way it explores another side of Sam Trickett’s life, namely the dark periods of his journey when he had to deal with depression and a gambling addiction. Overall, ‘High Stakes’ provides for a wholesome viewing experience.

One of a Kind: The Rise and Fall of Stu Ungar

The story of Stuart Errol Ungar is full of ups and downs and tragedy that was bound to inspire a great movie. Along with Johnny Moss, he is one of the two players to have ever won the World Series of Poker Main Event three times. Unfortunately, his life took a bad turn when he started to face drug and alcohol addictions, which eventually cost him his life at the age of 45. ‘One of a Kind’ does an amazing job going through these multiple sides of Ungar’s life and painting a picture of what it’s like to be a poker player with drug addictions.