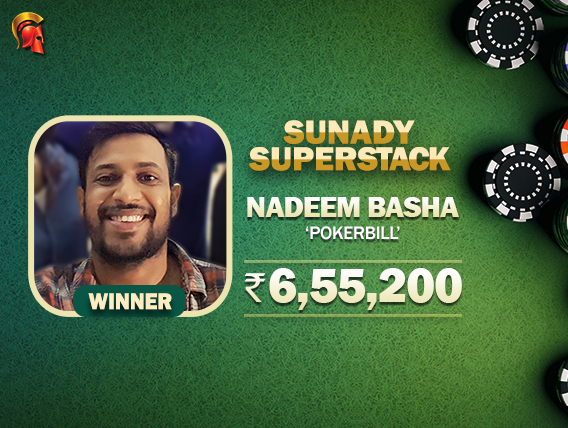 Nadeem Basha emerged victorious in the most recent Sunday SuperStack tournament at The Spartan Poker. Basha who plays under the moniker ‘pokerbill’ claimed the prize for INR 655,200. The tournament drew 504 entries to make a prize pool of INR 25,20,000. The prizepool was shared with the top 50 places with a min-cash of INR 12,600.

This is not only the title he has won but he has also claimed SSS #25 The Elite 35 Lac Gtd in August. Basha outlasted renowned poker player Anant ‘Pro’ Purohit in the heads-up battle who took the second place prize for INR 4,03,200.

Gutshot spoke to the winner after this victory. Basha expressed, “It was a really long grind. I had my eyes on Gayle Storm on adda52.com as I was cruising all the way till last 2 table. Busted 10th in it. But Sunday SuperStack was long due. It’s my first Sunday SuperStack that I have shipped. Final Table was pretty much very clear and straightforward with the chips in play. ‘Pro’ gave a tough fight till HU. Many many more to come.”