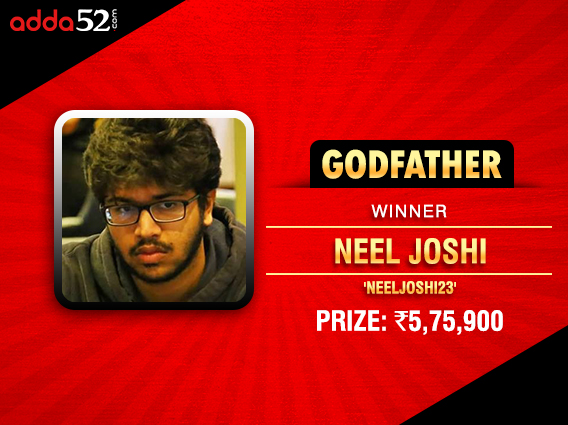 Indian poker players have a few of their favourite online tournaments and the Adda52 Godfather is definitely one of them. This is an extremely popular series not just because of the huge prize pool on offer every Thursday night at 8pm, but also because of the chance of winning an international poker trip.

Currently, Godfather 5.0 is underway, where eight winners will take their seats in an SnG Finale to determine the winner of the INR 7 lakh package trip to Australia. Yesterday was the final tournament of the series and Neel Joshi aka ‘neeljoshi23’ became the final entrant into the Aussie Finale SnG.

The tournament has a buy-in of INR 5,500 and yesterday, the INR 20 Lakh guarantee was passed, and a new prize pool of INR 22.15 Lakh was created due to the field of 261 entries that registered to play. Joshi emerged victorious from this field, after a long grind that ended at 4:45am this morning.

Joshi is one of those up and coming players who is a major contender in such featured tournaments online, recently also winning the PokerBaazi Freedom Special tournament on 15th August. Last night was another big addition to his poker bankroll, winning INR 5,75,900, from which INR 87,500 will be deducted towards his ticket to the Finale. Joshi has been on a good run in recent times, also finishing 6th in the MoneyMaker on PokerBaazi last week for around INR 4.75 lakh.

Gutshot caught up with Joshi after he took down the Godfather tournament and asked him about last night’s tournament. He said, “It was definitely a fun experience. I ran good too, and won a couple of crucial flips. I was playing really aggressive. The FT had many good regs in it, but the aggression paid off.”

Joshi further commented on the fact that he has to play quite a few good players in the Finale SnG, including Chiraag Patel and Abhinav Iyer, saying, “I’m definitely more excited about it, than afraid. It’s not going to be easy, but that only makes the reward much sweeter.”

Talking about his past live poker experiences and the chance of flying to Australia to play, Joshi said, “I’ve only played DPT Goa in July, that too because I won the super satellite. I don’t have much live poker experience but participating in the Aussie Millions is a dream. And now I’ve got a shot at it.”

On a parting note, Joshi added, “I highly appreciate the work Gutshot Magazine does. I read all the posts. Keep it up.” You too can stay tuned to GutshotMagazine.com for more updates on India’s biggest and best online and live poker tournaments.