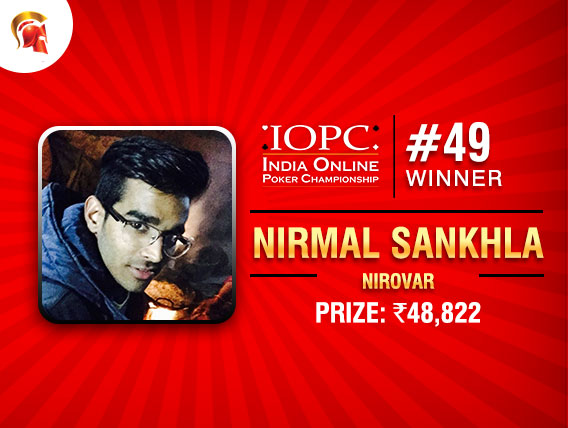 It was another fantastic series of the India Online Poker Championship (IOPC) hosted by The Spartan Poker, that has now finally come to an end. There were ten days of thrilling poker action on the virtual felts and yesterday was the final day of this record-breaking series.

IOPC Event #49 INR 2.25 Lac GTD (550 RE) was the first tournament of Day 10 and it kicked off at noon yesterday. 487 entries registered to the tournament and this led to the guarantee being beaten again, with a new, increased prize pool of INR 2,43,500 being generated.

The top 39 players were paid out a minimum of INR 1,680 and the top prize was taken away by Nirmal Sankhla aka ‘nirovar’, who outlasted all these entries and was awarded INR 48,822 for first place. It was his first title of the series and was clearly too late to make it to the IOPC Leaderboard. However, his bankroll would’ve certainly been boosted with this win.

The tournament came to an end in Level #42, with the blinds at 16,000/32,000 – 4,000. nirovar was playing heads-up against ‘Bhee’ and the former almost had a 2:1 chip lead against his opponent. In what became the final hand of the tournament, both players went all-in on the turn card.

Sankhla was holding 7-3 and Bhee held 6-A, with the latter clearly ahead pre-flop. The flop opened 3-A-7, giving Sankhla two pairs and Bhee an Ace-pair. The turn then opened 4 and Bhee decided to go all-in, which Sankhla happily called. The river card opened 8 and he won the showdown with his two pairs – Sevens and Threes. Bhee lost the heads-up battle but still managed to take away INR 32,459 for second place.

Gutshot had a word with Sankhla after this win. He told us about his introduction to poker, saying, “I had never heard of the game ‘poker’ in my life until I read an article about Dan Bilzerian where it was written that he plays poker. I was curious to know what it is, so went through it started learning the game. Now, I don’t know any other card game but poker. I didn’t play any freeroll or play money. As soon as I got to know about the game, I invested my time and money on it.“

He continued, saying, “As soon as I started, I was on winning ways in small buy in tournaments, learning from videos on YouTube. Recently, there had been some serious downswing and this win comes in handy.”

“I was solid in this tournament and luck was on my side too, as I was also deep in the ME and ITM in the last IOPC event with the INR 4,400 buy in. I was the chip leader when final 6 were remaining and there I played aggressively and stole pots,” he said about this particular tournament. He also mentioned that he has no plans in poker for now, and will onlu play recreationally.

Keep reading GutshotMagazine.com for more updates on the final day of the India Online Poker Championship.