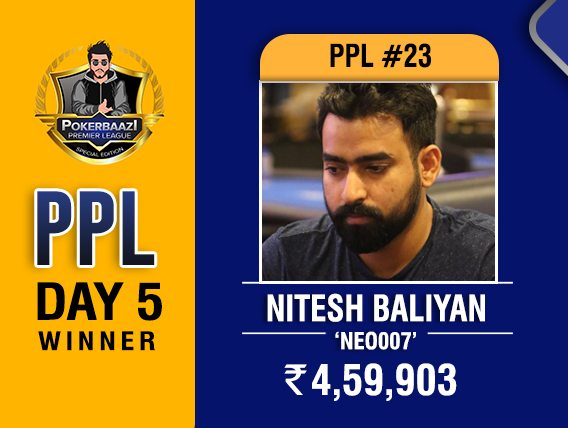 PokerBaazi is hosting a massive series named PokerBaazi Premier League (PPL). This time they have announced INR 7+ Crores GTD and poker admirers are entering and winning big. Yesterday saw another set of 5 tournaments lined-up and the competition observed 1800 + entries. Following is a summary of the events…

The first tournament of the day saw 237 entries for a buy-in of INR 1,000. There were many top names in the competition, but the eventual winner was poker pro Vaibhav Saigal aka ‘durrrr1310’ who walked away with INR 1,00,500 as the first-place prize money.

The tournament took off on a modest note attracting 252 entries (including 122 re-entries) for a buy-in of INR 2,200. The prize pool was later shared among the top 27 remaining players to receive a minimum cash of INR 4,183. The winner was Virat Dalsania aka ‘Pottli6007’ securing INR 1,18,591 prize money. The runner-up was ‘ChristopherCoke’ who took home INR 83,210

The third event of the day was the DeepStack Turbo which registered 664 players (including 353 re-entries) entering the tournament for a buy-in of INR 4,125. A prize pool of INR 24,90,000 was drawn to be distributed among the top 81 places receiving a prize money with a minimum cash of INR 6,225. The late-night tournament came to a standstill at 2:11 am and the winner was Nitesh Baliyan aka ‘neo007’ who bagged INR 4,59,903. He beat Wilson Yomso aka ‘kalingkaling in heads-up and landed in the second position with INR 3,22,455.

The biggest tournament of this online series saw the conclusion of Day 2 of The Endeavour INR 60 Lakhs GTD. A total of 122 places were eventually paid, recollecting the previous flight’s massive entries of 1315 players. The tournament concluded at 2:04 am and the winner was Mayank aka ‘Maahi13’ who took INR 11,24,325 as prize money. The runner-up was ‘Bloodless’ who managed INR 7,64,672. The previous flight chip leaders ‘gandukepille’ rested in the 6th position and Siddharth Karia aka ‘schemer’ at 11th.

PPL Day 6 action is about to begin tonight (September 25th) at 8:00 pm for a buy-in of INR 5,000 with the mega event being The Vegas INR 40 Lakhs GTD. For all latest updates on poker news around the world keep reading GutshotMagazine.com and stay tuned!