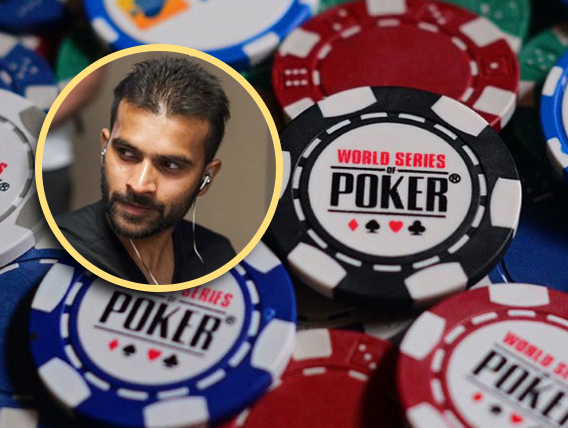 Team India came agonisingly close to picking up a bracelet at this year’s World Series of Poker. We reported yesterday that India’s Paawan Bansal was 3rd chip leader in Event #7: $565 Colossus, a No Limit Hold’em event which drew more than 13,000 participants. Yesterday’s Day 3 action eventually ended with the formation of the final table at this tournament and unfortunately for India, Paawan Bansal’s name is not on the list.

The day for Bansal (3.4 million chips) began with a challenge in that he was seated on the same table as chip leader Mathew Causa. Causa was the tournament chip leader holding the biggest stack (over 4.4 million chips) of the final 32 survivors who began the day’s play. The man who was just behind Causa was Thai Ha (4,095,000) who held the chip lead for most of the day on Tuesday. Other notables included the runner-up from the 2010 WSOP Main Event, John Racener. Play for the day kicked off in the Amazon room in Level 29 with the blinds at 30,000-60,000, and an ante of 10,000.

One of the early eliminations of the day was Kurt Jewell who was Day 1E chip leader, getting eliminated in 26th place ($22,003). And while he began the day as overall chipleader, it all came crashing down for Mathew Causa as he got eliminated in 23rd place for the same payday as Jewell. It didn’t go particularly well for the second chip leader either as Thai Ha hit the rails in 14th place for $35,087, his elimination coming at the hands of Sang Liu. Not long after it was Paawan Bansal who found himself going up against Song Choe and this is how the hand played out as reported on WSOP.com.

“Paawan Bansal just got eliminated after he got all his chips in the middle with a combo draw. Song Choe opened the action with a raise to 350,000 and Bansal was the only caller. Both players checked when the 9d Kd 8s flop came down, only to unleash the betting on the 4c turn. After a check by Bansal, Choe put out a bet and Bansal pushed all-in for around 1,800,000. Choe made the call and saw he had to fade a lot of outs with his As Ac against 6d 5d. The 9h river rolled off the deck and Choe’s rail started cheering loudly. Bansal was sent to the cashier.”

From 13,070, it’s now down to the final 9 in this event which boasts of a $6.5 Million prize pool plus that much coveted gold bracelet. In addition to the hardware, the winner will also walk away with a cool $1,000,000 first place prize. The afore-mentioned Sang Liu has a massive stack of 18,205,000 and leads the field. While this Las Vegas native is a virtual unknown, there is also John Racener still in at this final table albeit with a 4 million chip stack so its not going to be an easy ride for the pro. The final tablists are all asured a sum of $57,425 and you can come back right here at GutshotMagazine.com where we will bring you an update on who the winner of this Colossus will be.