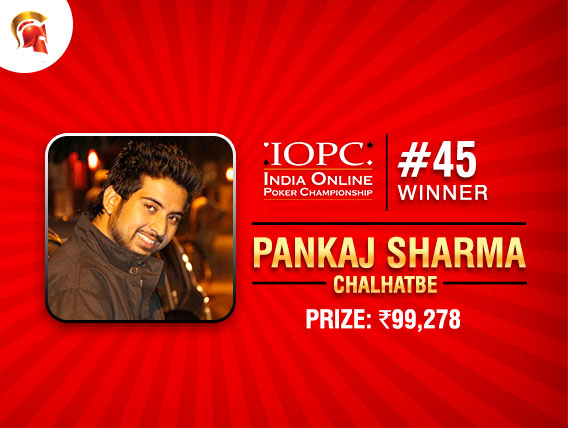 Friday was a good start to the weekend grind for Pankaj Sharma as he won his first title at the India Online Poker Championship’s ongoing edition at The Spartan Poker. That win seemed to jumpstart the momentum for Sharma who plays as ‘chalhatbe’ at Spartan. It was two-for-two for the Belgaum, Karnataka based player as he won the second event of the penultimate day of the IOPC.

Event #45 kicked off at 4:00pm and was a Rebuy+Addon format. It had a buy-in of INR 770 and promised a guarantee of INR 4 Lakhs for the participating players. That prizepool got enlarged a bit more courtesy of the 154 entries that came together to form the eventual prizepool of INR 4,27,000. 23 players would get paid with min-cash being INR 4,953. Many of the usual suspects from the online scene were participating in this tournament and they managed to make it to the money as well including Pulkit ‘Championplayer’ Goyal (11th for INR 8,326), ‘BolAuntyAuKya’ (5th for INR 29,463) and ‘imalucksac’ (4th for INR 36,722). When it came down to the battle for the title, once again we had two familiar faces in chalhatbe and state-mate Vidwath Shetty who plays under the moniker ‘RoronoA’.

It took a little over 6 hours for the field to drop down to the final two opponents gunning for the second title (chalhatbe) and third (RoronoA) titles of this IOPC edition. Both players had almost even stacks with RoronoA (1.67 million) holding a small lead over chalhatbe’s 1.51 million stack. The chip lead shifted hands when chalhatbe’s Jacks and Fives were better than the Nines and Fives of RoronoA. It took a couple more hands before the title deciding hand of the tournament took place.

After a preflop raise by chalhatbe (7h 9d) which was called by RoronoA (Js 5s). Both players hit the flop of 9c Jd 8h with RoronoA firmly in the lead. However that all changed on the river (9h) which gave a set of Nines to Pankaj Sharma along with the pot, the title and first place prize of INR 99,277. For his runner-up finish, Vidwath Shetty got himself a prize of INR 67,252.