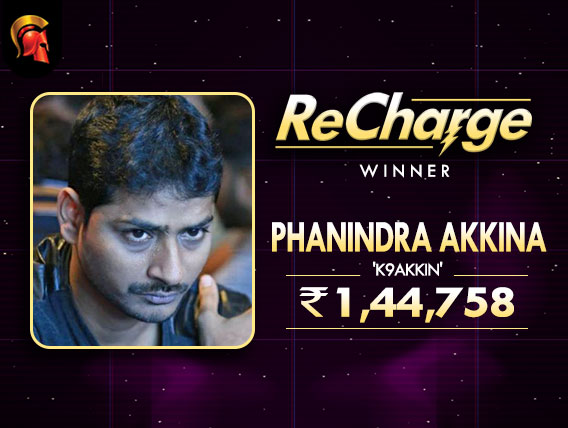 Last week, it was Kapil Vasita who managed to take down this tournament on Monday night but yesterday, we needed a 3-way deal to wrap up proceedings. 484 entries registered yesterday, each paying INR 2,200 to join the competition and eventually, the top 47 players were paid out a min-cash of INR 5,700.

However, the prizes kept increasing as the tournament went deeper and it was Phanindra Akkina aka ‘k9akkin’ who managed to take home the title after the deal. It was 2:44am when the last hand was played and the top 2 players were equally stacked at this time, with Akkina slightly ahead.

Recent DPT champion Ankit Kapoor aka ‘helter_skelter’ was this player but Akkina became the official winner because of his slightly larger chip stack, taking away INR 1,44,758 in prize money. As for Kapoor, he wasn’t too far behind Akkina, being rewarded with INR 1,41,141. In third place was ‘guru’, who bagged INR 1,25,599 in prize money for his finish.

Coming back to the winner, Akkina has been a regular player on Spartan Poker since a few years now and he has also won some massive titles in the past, one of the biggest being his SSS Main Event victory on the platform in September last year. He’s won a major on Spartan after a while, so this would’ve been a welcome victory for the player.

The field was softer than usual on Spartan and a couple of the few known names who finished in the money included Ashish Munot aka ‘Donkey 07’ (38th), and Sriharsha D aka ‘GTOsucks’ (29th). ‘ashokroy’ finished 18th in the tournament, someone who also won a title on SVS Day 1 a couple of days back.

Keep reading GutshotMagazine.com for similar updates on the top online and live poker tournaments in India.

Don’t have an account on Spartan Poker? Check out their review page here, and don’t miss out on their bonuses, promotions, and guarantee-smashing tournaments. Sign-up now.
Tagged : Online poker, Phanindra Akkina, Recharge, Spartan