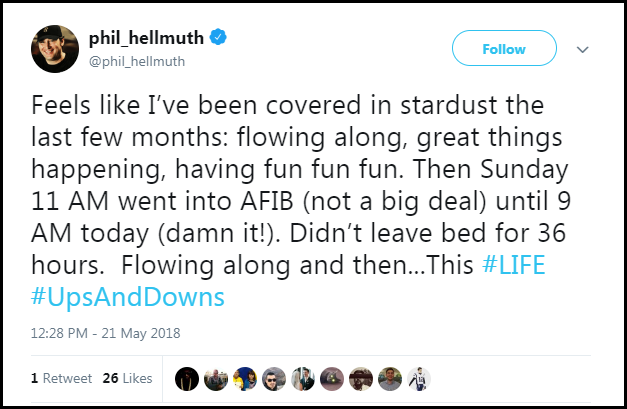 Earlier in the week the Poker Brat Phil Hellmuth sent out a tweet revealing he has a heart condition. Hellmuth suffered an arrhythmia on the previous Sunday which landed him in the hospital for almost a couple of days.

The condition that laid up Hellmuth is called AFib or Atrial fibrillation. It is an arrhythmia (i.e. a quivering or irregular heartbeat) which can cause blood clots, stroke, heart failure and other heart-related complications as per the description on the American Heart Association website. According to the AHA approximately 2.7 million Americans live with the AFib’ condition. While that might make it look like Hellmuth is not alone in suffering from this

The Godfather of Poker Doyle Brunson, who has had more than his share of serious medical conditions and has survived more than a dozen bouts of cancer in his long career, was cautious and urged Hellmuth to not brush it off that easily…

Hellmuth being Hellmuth not only downplayed his condition but after his 48 hour stint in the hospital headed straight into a tournament the WPT Bobby Baldwin Classic in Vegas. While Hellmuth busted just short of the final table by eventual winner Darren Elias, he did make a nice score of $57,935.

Love him or hate him, there is no question that Hellmuth is a total entertainment at the felt. And he will be the first one to tell you so. Here at Gutshot Magazine, we hope this a just a small blip in the life graph of the Poker Brat and he will continue to grace the felts across the world for many many years to come.