Adda52 is one of the leaders of the Indian poker industry with a major hold in the online as well as live space. They host regular live series in Goa and Sikkim under the ‘Deltin Poker Tournament’ brand while also hosting a number of high value tournaments on their online platform from time to time.

However, they’ve been under the pump in the last week or so, with several high-profile players calling for a strike against the company. It all began on the night of 10th August when Raghav Bansal, one of India’s most decorated pros, posted against Adda52’s outdated TDS policy for MTTs which leads to players paying way more than they do on other online poker platforms in India. Here’s a small bit of what his post included:

His post mainly was to get across the message that, “WE ARE GOING TO HAVE A MASS BOYCOTT FOR THE SUNDAY MTTS ON ADDA52.” He urged the community not to play in Adda52 MTTs until the company came back with a revised TDS policy, one that makes players pay 30% on net winnings like most other websites do.

Big Slick and Mega Suits were the two major Adda52 Sunday tournaments which received a participation of 669 and 502 entries respectively, both conceding overlays. With Adda52 having a user-base of nearly 2 million, the boycott of a few players didn’t hurt them much. However, a big question has been raised and it’s now to be seen whether something changes, or whether this fizzles off in a while.

Another player who has been actively fighting for a change in Adda52’s TDS policy is Raman Gujral and he was unable to be a part of a meeting that took place between Adda52 representatives and player representatives in Delhi on 12th August. However, we soon had some clarity on the outcome of the meeting thanks to another post from Raman on ‘The Players Group (TPG)’ on Facebook. Here is a small excerpt from that post: 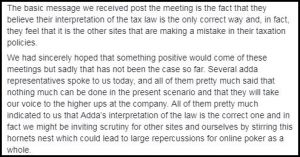 Sumit Sapra is yet another pro who has been urging players to fight this policy since a while. Gutshot spoke to him about this matter and he said, “I’ve been bringing up this issue time and again since the last 2 years, and I’m just glad that the players are finally waking up to it and taking a stand. There’s a lot that needs to change in the Indian poker ecosystem and this is one of the pain points and one of the most important issues.”

While these top players initially had an unofficial strike, the strike was soon made official thanks to a post from Aditya Sushant yesterday on the same Facebook group. Gutshot also caught up with Sushant, India’s first WSOP bracelet winners and one of India’s top poker pros, to give us a better understanding of the current situation. Here’s what he said:

“The situation has escalated recently but the issue has been a long standing one. We have always known that Adda52’s tournament TDS policy was unique. Everyone was essentially putting up with it because of the value that was perceived to be there and how soft the tournaments were earlier. That’s not so much the case anymore and the brunt is really being felt now.”

“Sumit Sapra was the first one to take up the cause and for a while had been trying to educate people about how this policy was essentially draining the system by effectively having every player pay more TDS than they are actually liable for. He kept making posts repeatedly and made noise but never truly gained traction. He highlighted his own example wherein even though he is a winning regular, he ended up losing out on a lot because of extra TDS being paid by him.”

“Recently, Raghav and Raman decided in the best interests of everybody to gather a rally and try and make a change. We as admins were pretty convinced and have decided to support them. Basically, our stance is that Adda52’s TDS policy will eventually drain the system and kill a lot of people, pros and recreationals combined. Very few people can actually make money this way. Pretty much, only the cream of the crop are profitable in the long run. Many people while aware of this still chose to keep playing because they weren’t educated enough about it.” 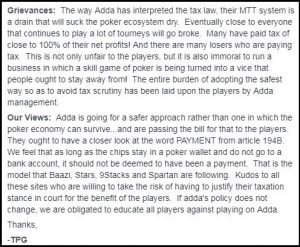 He further spoke to us about the purpose of the boycott, saying, “We are trying to educate people now and get them to stop playing on Adda until they either give the players relief (we are trying to get them to bear the extra TDS being paid by players) and/or change their existing policy. Even then, losing players and breakeven players really end up suffering because they are ending up losing money every time they cash. Essentially, they end up paying more than they should be liable to pay. When on the one hand, a site is trying to promote and push poker as a skill game, how it can effectively kill the goose that lays the golden eggs is beyond me. This environment is not sustainable and is not good for either the operator or the players. By our estimate, TDS in excess of several crores is going out per year.”

“One major gripe has also been that Adda52 has effectively turned a blind eye to all this over the last few years. Every time, the issue was brought up or attempted to be escalated, Adda has been guilty of never giving a suitable response and staying mum a lot of the times hoping the noise will die down eventually. We are taking a stand now because it’s about time. Adda has already drained the economy infinitely over the last few years and we feel it is our responsibility and obligation to each other as a community to not let this go on anymore.”

Another meeting has been scheduled in the next week and we hope that a better solution comes out from that meeting. Adda52 now has a new CEO in Naveen Goyal who has been around the gaming industry since years, recently ending a stint at Khel Group. We even spoke to him earlier this year and you can get the complete conversation here.

Keep watching GutshotMagazine.com for all major updates on this issue as well as other stories from the gaming industry in India.

Check out our online poker rooms section, where you can read reviews on the biggest and best poker rooms in the country, while also taking advantage of their bonuses and promotions. Check out these top poker rooms HERE.
Tagged : Adda52, Aditya Sushant, Online poker, Raghav Bansal, Raman Gujral, Sumit Sapra, TDS